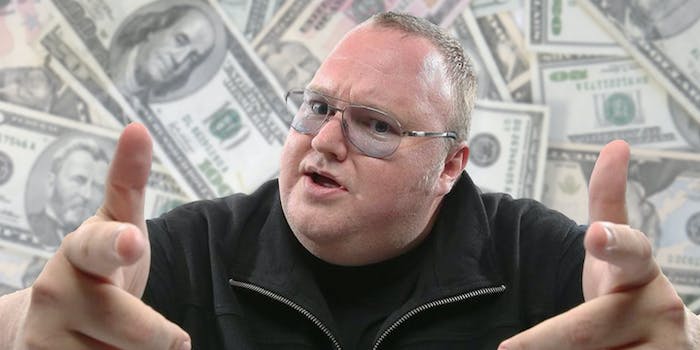 No jail for the "broke" Internet tycoon—at least not yet.

Larger than life Internet tycoon and Mega founder Kim Dotcom has finally caught a break: The U.S. just lost a bid to get him in jail before his next hearing.

Dotcom faces a slew of charges from the U.S., largely related to mass copyright infringement over his previous cloud storage site, Megaupload. In 2012, government troops led a helicopter raid on his New Zealand mansion, setting off a still-ongoing series of legal battles.

Dotcom is currently free on bail, though he does have a looming extradition hearing in 2015 that will determine if he’ll face trial in the U.S.

But an Aukland court found Monday that he was not actually a flight risk, and that he won’t have to go to jail to await that hearing. He will, however, have to meet with police twice a week, and is forbidden from riding around in a helicopter.

Dotcom announced Wednesday that he was “broke” from legal fights. He wrote on Twitter that his next court battle is an attempt to sue for $2 billion for government destruction of Megaupload.