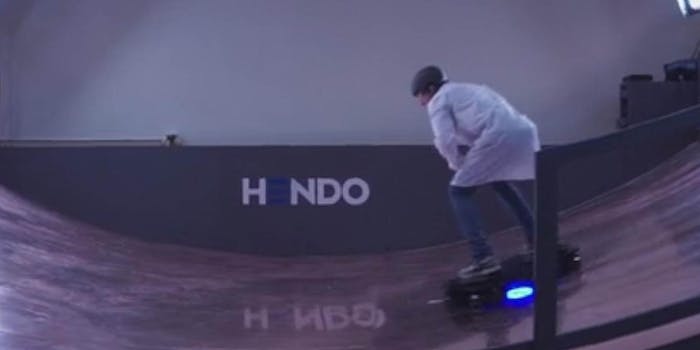 This Kickstarter hoverboard is the real deal

And hoverboards are just the start.

The hoverboard is just the beginning.

It’s not exactly what we’ve been seeing in Back to the Future II—the board was described by one reporter as “a noisy magnetic skateboard that can float above a copper surface” at about 1 inch—but it’s still one of the more interesting Kickstarter campaigns ever launched.

“When the 190-pound visitor stood atop the 100-pound board, one gentle push was enough to send him spinning across the room over a cushion of air,” the New York Times reports. Hendo claims its hoverboard can lift a 250-pound rider a half-inch above the ground.

Hendo Hoverboards, named for the Henderson family behind the California-based project, say they poured their life savings into their invention. Now, they’re looking to raise $250,000—they’re up to over $22,000 in just a few hours this morning—in order to build more boards, construct a hoverpark, hire engineers, build a lab, and design the next generation of boards. From there, the plans get much bigger.

Greg and Jill Henderson, neither of whom skate, admit that the hoverboard itself is just a way to show the world their technology in the simplest possible manner. What they actually have in mind goes well beyond that: Hovering trains, cars, and buildings.

“The Hendo Hoverboard is a first-step product, a precursor to the broader implementation of the world-changing technology of MFA [Magnetic Field Architecture],” the Kickstarter explains. “It enables a new generation of lift and motion technology that will change the way we view transportation. Additional applications for MFA technology are virtually limitless—from business, to industry, to healthcare, and beyond.”

“We have a number of applications in mind, with industries that range from warehouse operations, to building foundation improvements, to novel methods of electromechanical fluid separation. But what really excites us are the possibilities of applications we have no idea even exist – from new ways to harness energy, to replacing specific pieces of equipment in manufacturing processes; from the ordinary, to the exotic.”

“That’s why we picked the hoverboard: to capture that attention,” Greg Henderson told the Times. “If one in 10 people realize there is another use for this stuff, that would be a great success.”