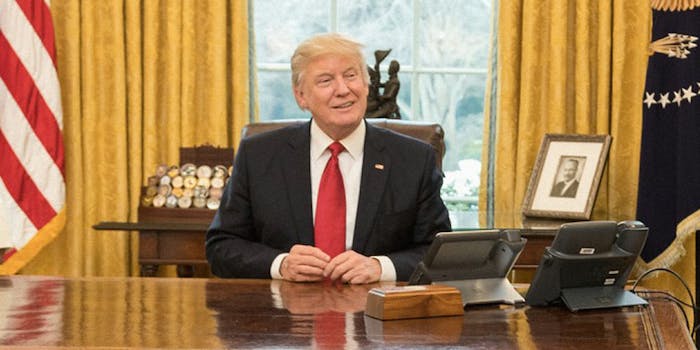 House Speaker Paul Ryan (R-Wis.) then interjected, calling for secrecy. “No leaks… this is how we know we’re a real family here.”

Ryan and McCarthy were both coming from separate talks at the U.S. capitol with Ukranian Prime Minister Volodymyr Groysman, who detailed Russia’s political hacking campaigns in Eastern Europe.

The conversation came a day after news broke alleging that Russia hacked the Democratic National Committee. When McCarthy brought the hacking up, he claims the research obtained by the opposition on Trump had been delivered to Trump himself.

Ryan, McCarthy, Rep. Steve Scalise (R-La.), Rep. Patrick McHenry (R-N.C.), and Republican Conference Chairman Cathy McMorris Rodgers were among those in the conversation. The following is a part of the Washington Post‘s recording:

“I’ll guarantee you that’s what it is… The Russians hacked the DNC and got the opp [opposition] research that they had on Trump,” McCarthy said, laughing.

Ryan asked who the Russians “delivered” the opposition research to.

“This is an off-the-record,” Ryan said.

“No leaks, alright?” Ryan said, adding: “This is how we know we’re a real family here.”

The offices of both Ryan and McCarthy initially told the Post that this report was “fiction,” before the Post said it had it on tape. They then said it was merely an “inappropriate joke.”