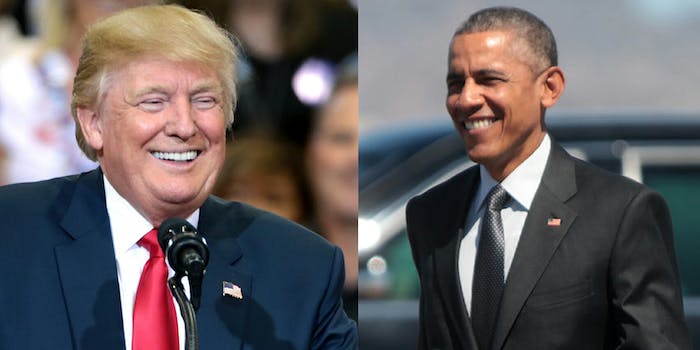 A high school valedictorian in Kentucky pulled a fast one on those listening to his speech over the weekend.

Ben Bowling, who graduated from Bell County High School in Kentucky on Saturday, elicited cheers when he read a quote he said was from President Donald Trump.

Except the quote was actually from former President Barack Obama.

“Don’t just get involved. Fight for your seat at the table. Better yet, fight for a seat at the head of the table.’ – Donald J. Trump,” Bowling said, drawing cheers from the crowd, presumably most of whom were from an area where Trump won with nearly 80 percent of the vote during the 2016 election.

Someone in a video of the speech, which was posted online by the Louisville Courier Journal, can he heard booing the mention of Obama.

Bowling, 18, told the newspaper that he “didn’t mean anything bad” by the quote fake-out.

“I just thought it was a really good quote,” he told the Courier Journal. “Most people wouldn’t like it if I used it, so thought I’d use Donald Trump’s name. It is southeastern Kentucky after all.”

Obama made the remarks that Bowling quoted during a 2012 commencement speech at Barnard College in New York.

You can see all of Bowling’s speech here.