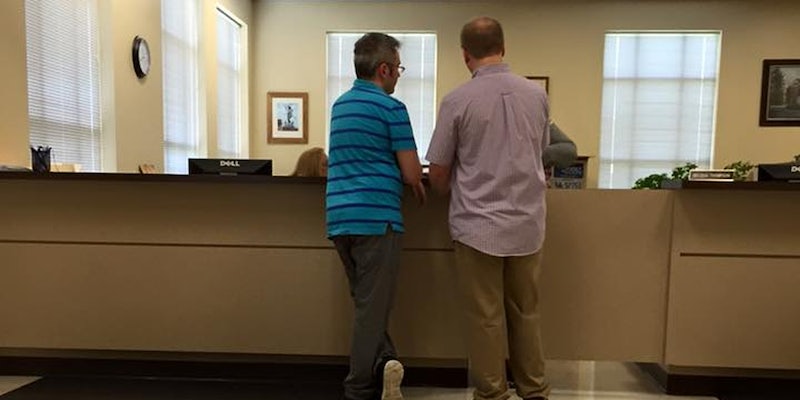 The religious-freedom battle against marriage equality has finally hit the Supreme Court.

Kim Davis is very likely on her way to jail for contempt of court.

The Rowan County, Kentucky, clerk, who has said that issuing same-sex marriage licenses would violate her religious beliefs, just hit a serious snag in her battle against federal law.

On Monday night, the Supreme Court denied Davis’s application to review a lower court’s mandate that she immediately begin issuing marriage licenses to same-sex couples. The SCOTUS order itself was a virtual slap in the face: it consisted only of a single blithe sentence.

“A public official’s personal religious opinion does not give her the privilege to trample over the rights of others,” Human Rights Campaign Senior Vice President for Policy and Political Affairs JoDee Winterhof said in a statement late Monday. “Freedom of religion is important, and Ms. Davis has the fundamental right to believe what she likes. But as a public servant, she does not have the right to pick and choose which laws she will follow or which services she will provide.”

Davis has returned to her office, crowd chanting "do your job" pic.twitter.com/FS4FLBr5Qf

Foremost in the crowd were David V. Moore and David Ermold, the Rowan County couple who has repeatedly asked Davis for a marriage license since the Supreme Court effectively legalized same-sex marriage nationwide in June. In a video posted to YouTube on Tuesday, Moore and Ermold scoffed at Davis’s use of God’s authority as a basis for defying federal law.

In a second tense video of the Tuesday morning interaction posted by the Kentucky Courier-Journal, Moore is seen calling Davis’s refusal to comply with the highest court in the nation “absolutely ludicrous” and then telling her “don’t smile at me” as she approaches.

“Why can’t I smile? I’m not being disrespectful to you,” replies Davis.

“You absolutely have disrespected us,” says Moore.

“This is what you’re doing: You’re telling us that we don’t have the same rights that you do,” says Ermold, “That you’ve enjoyed your entire life. Would you do this to an interracial couple?”

To that, Davis responded that she would not deny an interracial couple a marriage license if they were a man an a woman. She then announced that her office would not be issuing licenses “pending the appeal in the sixth circuit,” even as those in the crowd shouted that the Supreme Court had denied her ultimate appeal and that she was in contempt of court.

Moore and Ermold filmed two previous attempts at applying for licenses in Davis’s jurisdiction. On Aug. 13, Moore told the Daily Dot that the couple’s license was denied by Davis’s son, who acts as deputy county clerk. In the video, the exchanges between Ermold and the office workers are tersely polite, but his frustration is painfully palpable.

Davis’s appeal to the Supreme Court was the first time the court has been asked to rule on the alleged clash between same-sex marriage and religious beliefs in the US. An Apolistic Christian, Davis has said that signing her name on a marriage license for a same-sex couple would be akin to approving homosexuality and is thus in violation of her religious beliefs.