This tiny pod is your security and entertainment system in one

It’s many parts of the connected home, all housed under one hood.

Pierre Lebeau is sick of wires. He’s especially sick of looking at them coming from his home entertainment system. While he was supposed to be staring at the screen, all he saw was the unseemly setup of mixed-and-matched boxes and cords. “It was wrong, it had to change.”

His solution to the problem comes in an unlikely package. An egg-shaped pod that looks like the love child of Wall-E and the Apple design team, Keecker is Lebeau’s plan to roll the future into your living room. It’s the closest thing you’ll see to a real life DJ Roomba, and it does much more.

At its simplest, Keecker is a projector on wheels. Though it shouldn’t be defined as just that, it’s this feature that addresses the problem at hand. “The primary application is homes, making homes great,” Lebeau told the Daily Dot. “Forget fix[ed] devices, forget buying four of each… Keecker is about having everything you want, whenever you want, wherever you want, simply, beautifully.” It is the drive-by multimedia machine you didn’t know you needed.

The video projection system inside Keecker is designed to turn any surface into your new big screen. The lens moves at a 90-degree angle and is capable of 40-inch screen from two feet away—even larger as Keecker moves back. A speaker, labeled as providing “360-degree surround sound,” broadcasts from the back of the moving media player.

While it may be the home entertainment system of the future, it’s made compatible with the limitations of today, as well. “In the long term, we’re all about creating a completely wireless (we call it Wirefree) home, but in the meantime, people still have legacy devices,” Lebeau notes. “So we decided to build in a wireless HDMI receiver and give users a wireless HDMI dongle that they can connect to any HDMI device.”

There’s much more going on under the frame of Keecker than you’d see while just watching it project movies on the wall. What may have started as a wire-cutter’s home entertainment drone has turned into much more. It’s a full-blown computer with a camera and microphone for making voice and video calls and packed with unseen smart sensors that quantify the entire house.

When not being being used for projection purposes, it’s keeping track of the temperature, humidity, and CO2 levels, ready to alert users if anything is out of whack. When the homeowner is away, Keecker stays on alert and can be used to monitor the house remotely through its built-in camera. Lebeau says “Keecker is therefore a little house guard and monitors your home when you’re not there.” It’s many parts of the connected home, all housed under one hood.

Lebeau created Keecker to put “everything that matters at home into a beautifully designed device.” In his mind, Keecker is about much more than just ridding the house of wires. The former Google project manager believes Keecker can be like “the iPhone, but for your home.”

Users will have the ability to connect to Keecker via smartphone, with unique profiles for each member of the family. Guests can also be granted temporary controls, though functionality is more limited.

Of course, as with anything robotic, things get a little ominous. “Keecker is always on,” Lebeau says, though users can turn it off if they so choose at the risk of missing out on those additional home monitoring features. In its process of gathering information about the home and its users, as well as watching over the place through its camera, Keecker also maps the house for purposes of its own movement. In short, there is a lot of potentially sensitive information stored inside this egghead of a device. Making sure that data is treated as sensitively as it should be is crucial. The last thing people want wheeling around their house is a little robotic, turncoat spy.

“We think it is the first real collective computer: to share, and live with technology together, simply.”

Lebeau looks at Keecker the same as a home computer and believes that safety and security are key. “We are 200 percent dedicated to making Keecker secure, and letting users know exactly what happens on Keecker at any give time is key,” he said. Though he did not provide any information in regards to encryption on the device, he insisted that “the connection between Keecker and the users is super safe” and is “password- and account-protected.”

Keecker runs on the Android 4.4 operating system, a malleable platform but one with security concerns of its own. Lebeau says the mobile OS is a solid environment to start from, but he’s also taken steps to ensure the safety of Keecker and its users.

“Apps installed on Keecker come from the Google Play store. Unverified apps, or those requiring root access, will therefore not be allowed,” he explains. “Plus, we increase the security by restricting access of particular features for third-party apps and inform users in real time what is happening on Keecker.” He also stated that apps installed on Keecker are monitored for malware, a problem increasingly on the rise for Android users.

After a successful Kickstarter campaign during fall 2014, it’s going on pre-order next week and will start shipping in fall 2015. For those who are willing to welcome Keecker into their homes, Lebeau believes they’ll be getting a whole new home experience. “We think it is the first real collective computer: to share, and live with technology together, simply… one home, one family, one device.” 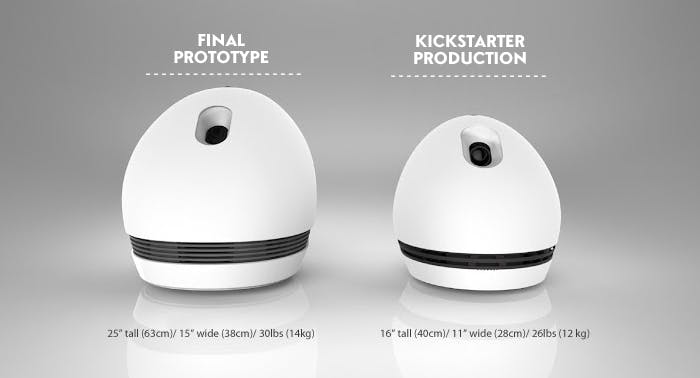 Its price tag, presently set at $3,000, may be hard to swallow, especially in a household where multiple people want access. Lebeau says “our future roadmap will address this even better.”

But for the time being, if Keecker eliminates buying a massive TV, sound system, and tons of house monitoring equipment, the math may work out more in your favor.