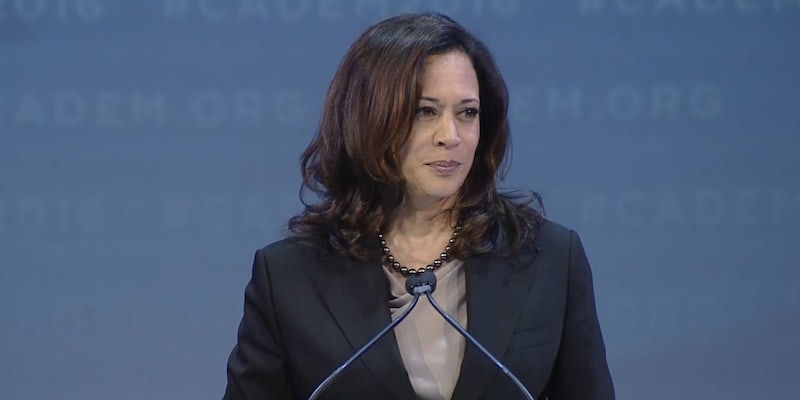 Sen. Kamala Harris (D-Calif.) condemned the violence that erupted in Charlottesville, Virginia, over the weekend by using President Donald Trump’s (much criticized) “many sides” response against those who fail to denounce hate.

Trump commented on the violence on Saturday and condemned the “egregious display of hatred, bigotry, and violence on many sides, on many sides,” which prompted swift criticism for not directly condemning the white supremacists who were at the center of the erupting violence.

In an essay posted on Medium, Harris used the “many sides” quote as the crux of her argument that there are not “many sides” to what occurred in Charlottesville.

“I often advocate that we look at many sides of an issue, walk in someone else’s shoes, and identify and reject false choices,” Harris, who is viewed as a possible candidate to challenge Trump in the 2020 election, wrote. “But there are not ‘many sides’ to this.”

Harris then continued to use the “many sides” comment to point out moments in history where excuses like that were used to further systemic racism and segregation.

“’Many sides’ suggests that there is no right side or wrong side, that all are morally equal,” Harris wrote. “But I reject that. It’s not hard to spot the wrong side here. They’re the ones with the torches and the swastikas.”

Harris’ essay echoed similar sentiments from lawmakers and various groups following Trump’s reluctance to condemn the white supremacists. The White House and senior officials in Trump’s administration attempted to quell the criticism with their own, more pointed denouncements.

At the end of the essay, Harris said despite the images and emotions that have risen to the surface in light of the events at Charlottesville, she feels optimistic.

“There is hope to be found,” Harris wrote. “The truth is that the vast majority of Americans are good, fair, and just, and they want their country to reflect those ideals. And the fact that yesterday’s explicit hate was met with near-universal condemnation affirms my belief in our capacity to overcome evil. We don’t have to let extremists define us. Opportunities to do right are right in front of us. We just have to seize them.”