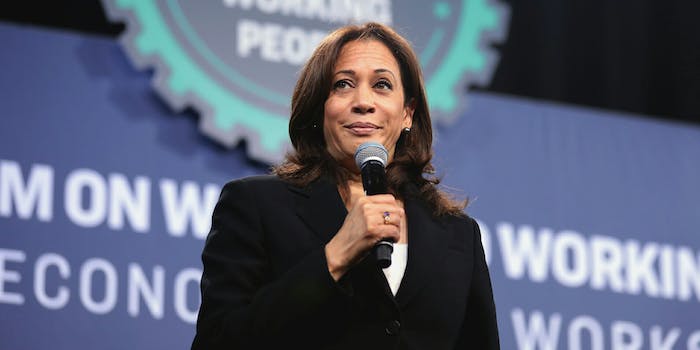 Sen. Kamala Harris (D-Calif.), one of many Democrats seeking their party’s nomination for president in 2020, threw some shade at fellow hopeful Joe Biden when asked about how she responded to chatter that she would make a good vice presidential candidate.

Since Biden entered the race, he has sat near the top of most 2020 polls among Democratic primary voters. However, it is still early in the process—with the first Democratic debates scheduled to take place next month.

Harris was asked by a reporter about talk of her being a good candidate to be vice president if she weren’t to capture the party’s nomination.

Her response, according to several reports, was that Biden would be a good vice president because he’s done it before.

I asked Kamala Harris if she’s sick of all the talk of how she’s the perfect VP. She responded: I think that Joe Biden would be a great running mate. That as vice president he's proven he knows how to do the job. pic.twitter.com/9wHwOlKoxw

Kamala Harris here in NH: “I think Joe Biden would be a great runningmate. As vice president he’s shown he can do the job.”

The not-so-subtle shade was noticed and respected.

.@KamalaHarris: “I think Joe Biden would be a great runningmate. As vice president he’s shown he can do the job.”

Sen. @KamalaHarris in NH: “I think Joe Biden would be a great running mate. As vice president he’s shown he can do the job."

KAMALA FOR THE PEOPLE (and the kids). #READ pic.twitter.com/JFYP9J2qZO

I'm here for women rightfully claiming their place at the top pf the ticket https://t.co/8Pgp6g3Wuc

Literally in awe of this shade. https://t.co/7YcWEu9cEj

It’s still extremely early to predict who will ultimately get the nod to run against President Donald Trump, but Harris clearly isn’t running to be someone’s vice presidential candidate.