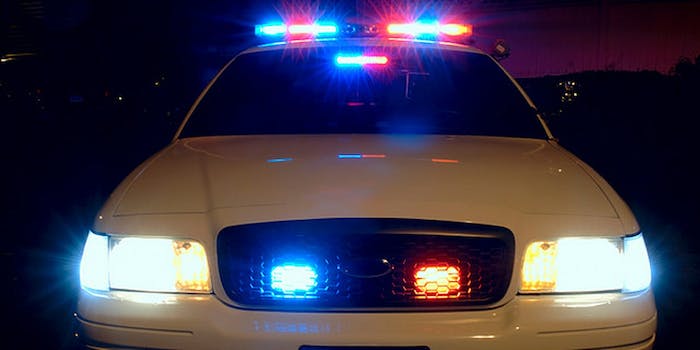 Uber made him do it.

According to a report released Monday, the Uber driver who killed six people last month in Kalamazoo, Mi. told police that the Uber app was controlling him at the time of the shooting spree.

Jason Brian Dalton, the man accused of shooting eight people—killing six and injuring two—on February 20, 2016 continued to complete fares as an Uber driver over the course of the evening. Dalton has now told police that the Uber app “started making him be like a puppet” and that his phone was “controlling him.”

The police report includes a detailed report of interviews conducted with Dalton in which he explains what he experienced, though he claimed to have difficulties remembering the events of the evening.  In the report, Dalton explained “when the app changed from red to black that is when he started having problems.”

In Dalton’s account of the evening, he said that a devil-like figure appeared, a “horned cow head or something like that and then it would give you an assignment and it would literally take over your whole body.” He went on to discuss symbols for the Masons and the Eastern Star, two orders of the Freemasons, which Dalton claimed his grandmother and grandfather to be a part of.

Dalton struggled when it came to describing the moments of the killings, claiming to remember hearing gunshots but not firing the weapon himself, though the report noted he pointed his hand in the shape of a gun while talking about the events.

He described the evening as an out-of-body experience that he wasn’t in control of. Instead, it was the Uber app that guided him through the killings. “He said it starts out that you have to follow the navigation, but it gets to the point where you don’t have to drive at all, the car just goes,” the report stated.

While Dalton struggled to recall the events of the evening, he had a clearer memory of what made him want to drive for Uber. He explained to the police that he simply wanted to make some extra money, and that he had never spoken to anyone at the company nor was he put through any sort of hiring process when he signed up to drive. He only had to provide a picture of his driver’s license and insurance.

In response to the mass murder in Kalamazoo, Uber reiterated on a conference call that it believes its safety provisions and background checks are sufficient and no change in policies would be implemented.

At the time of the killings, Dalton wasn’t driving the car he was registered to drive on Uber; he was in a Chevy HHR while he had registered his vehicle to the service as a Chevy Equinox.

Dalton was clad in a bulletproof vest that he had bought for his son when he was arrested, which he also attributed to the app’s control over him. He said he would have tried to have a shootout with the police had the app told him to, as well.

The police are waiting on a mental competency test, expected to be delivered no later than May 2, to determine if Dalton is competent enough to stand trial. He is charged with six counts of murder, two counts of assault with intent to commit murder, and eight counts of felony firearm use.