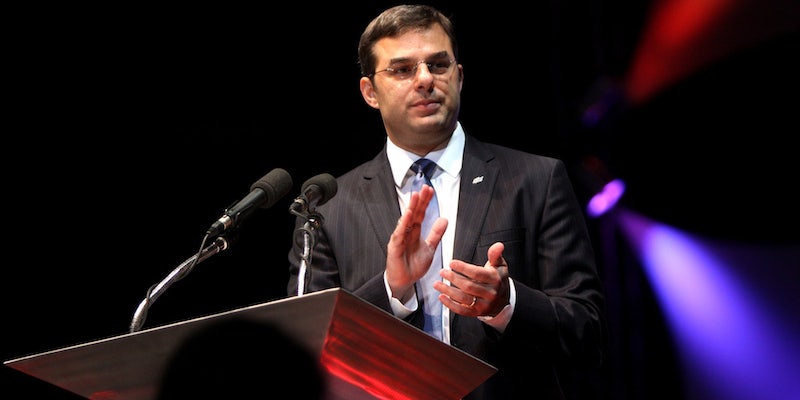 Rep. Jim Sensenbrenner's USA Freedom Act gets the seal of approval from Amash, who lost a narrow fight to defund NSA phone spying.

Congress’s next legitimate chance to stop the National Security Agency from collecting information on all Americans’ communications might be just around the corner.

Despite hundreds of thousands of petition signatures, three major protests, and a drastic shift in public opinion, there’s only been a single time since former NSA contractor Edward Snowden exposed its surveillance programs that Congress has actually voted on whether to reign in the agency.

But the co-author of that first attempt, Rep. Justin Amash (R-Mich.), thinks an upcoming bill, by Patriot Act author Jim Sensenbrenner, really could be it.

Amash’s bill was actually an amendment to a budget, and would have simply defunded the NSA’s program that tracks the metadata—phone numbers, call times, and possibly locations—of Americans’ calls. It failed by a mere 12 votes, and Amash later said that several in Congress told him they’d change their votes now if they could.

Sensenbrenner’s bill, already touted for a few weeks, is expected to be introduced Tuesday. Six of its cosponsors are House representatives who voted against Amash’s amendment bill, and clearly now have voter’s remorse.

There’s more than a hint of irony to Sensenbrenner bringing this before Congress. The bill would overturn the part of the Patriot Act that has been interpreted by courts to allow metadata collection, but the Patriot Act was originally Sensenbrenner’s own work. His new bill indicates he hasn’t lost his flair for long acronyms since the Patriot Act was passed in 2001: It’s called the United and Strengthening America by Fulfilling Rights and Ending Eavesdropping, Dragnet Collection, and Online Monitoring Act—or the USA Freedom Act.

Speaking before a crowd of several thousand privacy activists in Washington, D.C., Saturday, Amash offered his wholehearted support for Sensenbrenner and the USA Freedom Act. He didn’t mention any of the other dozen or so anti-NSA bills in congress:

I actually went into [Sensenbrenner’s] office when I was pushing the Amash-Conyers amendment . I said I wanted to meet with him, to convince him to support the amendment. And I got to his office and when I got there he said, “I know you’re here to tell me about your amendment. I’m going to support it.

Amash told the Daily Dot that it was remarkable his amendment had done as well as it had, given the constraints it faced.

“And I gotta tell you that afterwards, after we had that debate, people were saying congratulations, proud of what we’d done, even though we hadn’t had the vote yet,” he said.