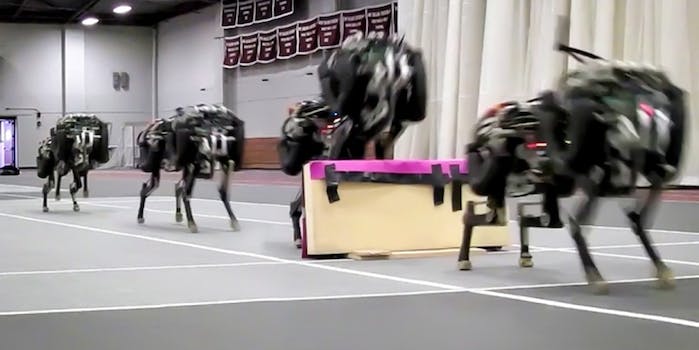 Well, we had a good run.

The end is nigh. Researchers at what has clearly become a supervillain incubator, the Massachusetts Institute of Technology, have created a cheetah-shaped robot which can successfully leap and land. This is a milestone in robotics—and in the history of the human race.

Logic dictates that this breakthrough will result in herds of robo-cheetahs snapping the necks of mall shoppers and tearing out the throats of sports fans around the globe.

The MIT robot is the first to successfully and—most horrifyingly—autonomously leap and land, jumping over hurdles by doing what any organic creature does. It detects an object, identifies it as an obstacle, estimates the obstacle’s distance and height, calculates the best point from which to jump, adjusts its stride, and exerts sufficient downward pressure to clear the obstacle. Then, as it jumps, it arranges its limbs in such a way as to counter the forward force while retaining balance and quickly resuming forward motion.

The roboticists, including Sangbae Kim, an assistant professor of mechanical engineering at MIT, research scientist Hae-Won Park, and postdoctoral researcher Patrick Wensing, conducted experiments with their robots both on treadmills and on an indoor track. The mechanical soon-to-be killing machines maintained an average speed of 5 miles per hour while clearing obstacles up to 18 inches high, or half the robots’ height.

These robots have no eyes. In what manages to be the most distressing fact of this unnatural beast’s creation, it “sees” with a kind of laser-based radar called LIDAR (light detection and ranging).

That’s right. These are robot cheetahs with laser eyes.

The robo-cheetahs will make their ominous debut at DARPA’s Robotic Challenge in June. For those who don’t know, DARPA—the Defense Advanced Research Projects Agency—is a division of the Department of Defense responsible for creating, testing, and encouraging the creation of technology for military use.

So, nothing to worry about there.

At least we can be thankful that the lion robot is not so advanced.