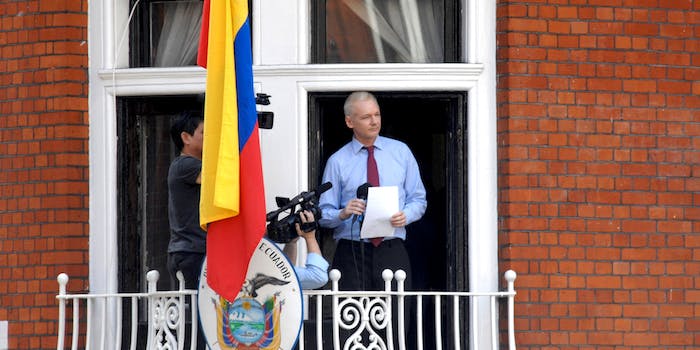 Assange may face espionage charges if ever captured by the U.S. government

WikiLeaks founder Julian Assange, the target of one of the largest national security investigations in U.S. history, agreed on Thursday to hand himself over to authorities. There’s only one catch.

In exchange for his surrender, Assange is asking President Barack Obama to grant clemency to Chelsea Manning, a former U.S. Army private convicted in 2013 of leaking sensitive government files to WikiLeaks. Under the U.S. Constitution, Obama has the authority to pardon or commute the sentences of prisoners convicted of federal crimes.

Manning, a transgender woman, is currently serving out the remainder of a 35-year prison sentence at the U.S. Disciplinary Barracks in Leavenworth, Kansas. She suffers from gender dysphoria (as diagnosed by military doctors) and in July attempted to end her own life, later citing a lack of appropriate treatment as the cause. The military agreed this week to allow Manning to undergo sex reassignment surgery drawing an end to a hunger strike initiated by the prisoner five days before.

While there’s no indication the Obama administration would consider Assange’s offer—the White House did not respond to a request for comment—the president has the ability to commute Manning’s sentence and set her free. (In contrast, a “pardon” is applied in the case of a former prisoner who has already completed their sentence.) According to the Office of the Pardon Attorney, Obama has granted 575 commutations during his presidency, more than the last nine presidents combined, while denying nearly 9,000 commutation requests.

Despite the Army agreeing to Manning’s request for treatment, she must still attend a hearing on Sept. 20 concerning a set of charges stemming from her suicide attempt. Those charges reportedly include “resisting the forced cell move team” and “conduct which threatens.” Manning’s lawyers have characterized the charges as “absurd,” stating it is impossible Manning resisted the cell extraction, or threatened the safety of the prison guards, since she was unconscious when they arrived. Manning additionally faces a charge of “prohibited property” for a book in her cell allegedly mislabelled.

According to the American Civil Liberties Union, Manning, if convicted, could face an array of harsh punishments, including solitary confinement, reclassification into maximum security, and an additional nine years in medium custody. The conviction might also negate any chance of parole.

Last month, Manning supporters delivered more than 100,000 signatures calling on Secretary of the Army Eric Fanning to drop the charges.

“Chelsea’s access to mental health care has been inconsistent,” Manning attorney Chase Strangio of the ACLU said at the time. “It is an ongoing concern of her attorneys and supporters that she is not getting adequate mental health care, particularly in light of the external forces that are destabilizing her mental health, like the service of these administrative charges against her and the ongoing investigation of those charges.” 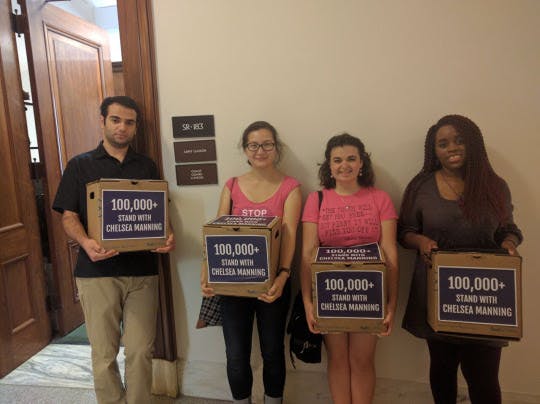 100,000+ signatures delivered to the Army requesting Manning’s charges be dropped.

Manning was previously held in solitary confinement for nearly a year at Marine Corps Base Quantico in Virginia for up to 23 hours a day and was forced to strip naked at night. The treatment, the U.N. special rapporteur on torture found, was tantamount to “cruel, inhuman, and degrading treatment.”

Dr. Daniel Ellsberg, a whistleblower who leaked the Pentagon Papers in the 1970s, told the Daily Dot by phone that he believes the solitary confinement faced by Manning amounts to a threat of torture by the U.S. government. “It is in fact very common,” Ellsberg said, regarding the isolation of prisoners for extended periods of time, a practice shown by scholarly research to have devastating effects on the human psyche. (Approximately half of all prison suicides in the U.S. occur in solitary confinement.)

“When you say ‘indefinitely,’ we’ve seen for example in the U.S. system that can mean years, really, many years even,” Ellsberg said. The fact that solitary confinement is widely used, he added, “doesn’t mean that it’s acceptable, or normal, or tolerable, but rather that torture goes on very widely in our prison system.”

Manning’s treatment at the hands of the U.S. government may offer a preview of what life would be like for Assange were he to wind up in the U.S. under charges of espionage.

A United Nations working group ruled early this year that Assange has been “arbitrarily detained” by the British government for more than four years. Assange, now 45, fled to Ecuador’s London embassy in August 2012 to avoid extradition to Sweden where he is sought by police for questioning over sexual crimes, which he has denied committing. Assange has previously stated he believes Sweden’s request is a ruse by officials seeking to curry favor with the U.S. government by handing him over to face espionage charges for leaking classified U.S. information.

This week, the Ecuadorian embassy agreed to allow an Ecuadorian prosecutor to question Assange at the London embassy on Oct. 17. on behalf of Sweden. Swedish chief prosecutor Ingrid Isgren and a police investigator are permitted to be present during the questioning.

In the past, Assange has offered to surrender himself for extradition, provided U.K. and Swedish authorities would confirm publicly they had no intention of extraditing him to the U.S. for WikiLeaks-related activities. That offer was apparently refused or ignored.

Assange’s fears are well grounded. The FBI claimed as late as last year that files pertaining to WikiLeaks are exempt from freedom of information laws due to an “ongoing criminal investigation.” The FBI also targeted Jacob Appelbaum, an activist and researcher and known confidant of Assange, with a warrant to acquire a year’s worth of his data from Google.

WikiLeaks did not immediately respond to a request for further details about Assange’s offer.

Update 4:20pm CT, Jan. 17: Obama has commuted Manning’s sentence. She will be released on May 17. In a statement, Assange thanked Manning’s supporters for “making the impossible possible.”

Assange: "Thank you to everyone who campaigned for Chelsea Manning's clemency. Your courage & determination made the impossible possible."

Assange has yet to comment on whether he will turn himself over to authorities.