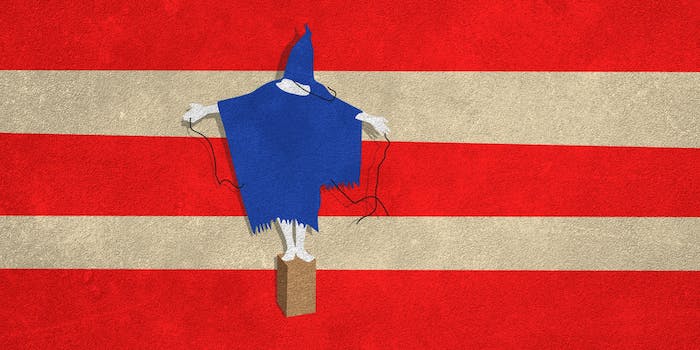 This is the furthest a case involving the CIA’s use of torture has gotten in the courts.

A federal judge has decided that a lawsuit against two former Air Force psychologists who engineered and profited from the CIA’s Bush-era interrogation program may proceed, marking the furthest a case involving the agency’s use of torture has gotten in the courts.

The landmark decision allows two former CIA detainees, as well as the family of a third who died in custody, to try to win damages for the suffering they endured while being held in the agency’s secret prisons.

The plaintiffs—Suleiman Abdullah Salim, Mohamed Ahmed Ben Soud, and the family of Gul Rahman—were captured in the early 2000s and accused of being members of Al Qaeda. They were never charged or tried. The former detainees claim, among other things, that they were beaten, subjected to water torture, and kept naked for extended periods of time. The two living plaintiffs say they still suffer physically and psychologically from those experiences.

Speaking from a U.S. District Court bench in Spokane, Washington, on Friday, Judge Justin Quackenbush indicated that he’d deny a motion to dismiss the lawsuit against psychologists James E. Mitchell and Bruce Jessen. (Washington is where the pair headquartered their company while working for the Central Intelligence Agency.) “I don’t think I have any other choice,” the judge said after hearing the defendants’ lawyer argue that the court lacks jurisdiction to hear matters best reserved for the “political branches of the U.S. government.”

“The Senate report is so detailed, there couldn’t be any argument that CIA torture was a state secret.”

In past cases where alleged torture victims sought redress, the government has blocked the lawsuit by invoking its state secrets privilege. In 2006, for instance, the U.S. turned to this privilege to stave off a lawsuit from Khaled El-Masri, a German citizen who claimed that he was beaten and sodomized at a secret CIA prison in Afghanistan.

But American Civil Liberties Union attorneys representing the former detainees say that declaring the program a state secret is no longer an option: The 2014 release of the summary of the Senate’s so-called “torture report” described the CIA’s brutal interrogation techniques in devastating detail.

“The Senate report is so detailed, there couldn’t be any argument that CIA torture was a state secret,” ACLU attorney Dror Ladin, who is representing the plaintiffs, told the Daily Dot in a phone interview. “The government did not even attempt to make that argument.”

Instead, Justice Department lawyers noted in a filing to the court that the psychologists will likely be asked to disclose classified information as the case moves forward. The possibility remains that the government will invoke the state secrets privilege later on to prevent the disclosure of particular pieces of information.

On Friday, the judge ordered that both sides present a plan for discovery within 30 days.

Ladin said that due to the wealth of information contained in the “torture report,” including identification of each of his clients, the ACLU will largely rely on public records. “There’s very little that is unknown involving the defendants’ responsibility and involving what happened to our clients,” he said. “We actually don’t believe there needs to be much discovery in this case.”

Mitchell and Jessen’s defense lawyers, on the other hand, warn of a lengthy process ahead of acquiring classified documents to show that their clients should not be held liable for what occurred in the CIA’s program. The pair was pseudonymously mentioned in the Senate’s report as having advised the agency to use methods like waterboarding, which bodies like the International Red Cross consider torture. The defendants’ lawyers could not be reached for comment.

The report also goes on to describe Jessen has having personally examined Gul Rahman, the now-deceased plaintiff, and suggested the techniques necessary to “break” his will. Autopsies showed that Rahman froze to death in his cell after being shackled and stripped from the waist down. Mitchell has also publicly admitted since the report’s release that he personally waterboarded Khalid Sheikh Mohammed, one of the principle architects of the Sept. 11, 2001, terrorist attacks.

The plaintiffs seek more than $75,000 in punitive damages and attorneys’ fees from Jessen and Mitchell.

Some, such as President Barack Obama, have said that prosecuting Bush administration officials for their roles in the CIA’s brutal interrogation program would hold the country back. For others, it’s the only way to move forward.