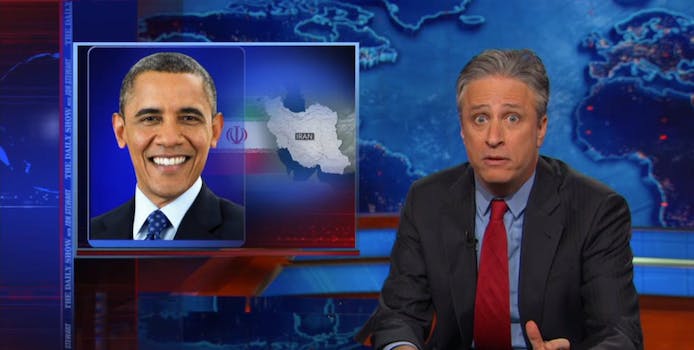 Settin' 'em up and knockin' 'em down.

If this isn’t a perfect set up for The Daily Show, I don’t know what is.

This week, a group of 47 Republican senators sent an open letter to the government of Iran in an apparent effort to derail the Obama administration’s nuclear negotiations with the Middle Eastern nation.

The letter, which warns Iran’s leadership that they “may not fully understand our constitutional system,” explains that any deal Iran makes with the Obama administration can be easily overturned by the next president after President Obama leaves office in 2017 or by Congress now or in the future.

Of course, members of Congress meddling in executive negotiations is, let’s say, a bit uncouth. And by uncouth, I mean they may have committed treason.

All of which serves a perfect slow pitch right across the plate for Jon Stewart.

As Stewart points out, Republicans are not the only party to have circumvented a president’s foreign policy efforts. In 2007, for example, then-Speaker of the House Nancy Pelosi (D-Calif.) thwarted protocol by visiting Syria to meet with President Bashar al-Assad.

Of course, this being American politics, the very people who defended or criticized Pelosi have taken the exact opposite stance against Cotton and his GOP cohorts.

In a USA Today op-ed published on Wednesday, Sen. Cotton defended the letter, asserting that his and the 46 other signatories’ goal is “to stop Iran from obtaining a nuclear weapon,” but that congressional approval of a deal is the only way to ensure that happens long term. According to the Daily Beast, however, Republicans are quietly facepalming themselves for what they are beginning to see as an ill-conceived political stunt by their colleagues on Capitol Hill.

Democrats and sympathetic talking heads aren’t the only ones upset by the Republicans’ letter. A White House ‘We the People’ petition demanding criminal action against the senators who the petition’s author says “committed a treasonous offense.” The petition garnered the 100,000 signatures needed to prompt a response from the White House in under 24 hours. It currently has over 144,000 signatures.

Whether the senators will suffer any legal repercussions remains to be seen (though, let’s be real, nothing like that is going to happen), but in the mean time, we’ll just have to settle for laughing at them.

Screenshot via The Daily Show