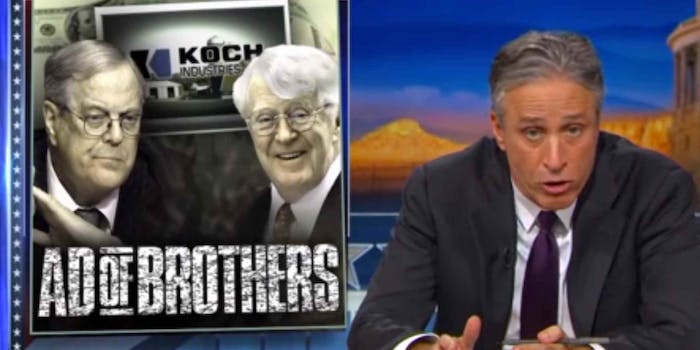 What did they think was going to happen?

This week, Jon Stewart and the team over at The Daily Show noticed something odd about an ad that recently started appearing during the fake news show’s commercial breaks.

The ad features ham-handed attempts at inspiring platitudes, footage of sweeping midwestern vistas, and images of hard-working Americans smiling directly into the camera. It’s intended to burnish the public image of a giant corporation. These features describe many commercials that have aired during The Daily Show.

What surprised Stewart’s team about this commercial was the corporation trying to burnish its image: Koch Industries, the massive energy and manufacturing conglomerate run by right-wing billionaires Charles and David Koch.

In recent years, the Koch brothers have earned the ire of progressives for leading the charge to deluge the political system with unlimited campaign cash. The Supreme Court’s 2010 Citizens United decision opened these floodgates, but it was the Koch brothers who first mounted the wave in a major way. In the 2012 election cycle alone, the Koch brothers donated over $400 million dollars in support of conservative causes and candidates. Their money has been well spent: Its recipients tend to pursue policies that pad Koch Industries’ bottom line.

The vast majority of the Koch brothers’ donations are funneled through a shadowy network of nonprofit front groups intentionally designed to obscure the funding’s source. Stewart and Co. have railed against the Kochs’ influence on politics for years, hitting them particularly hard for their financial obfuscation. Koch Industries’ dark history—from illegally selling petrochemical equipment to Iran in violation of the U.S. embargo to creating environmental disasters by dumping massive amounts of hazardous chemicals into public waterways—is more misunderstood than comically evil. So when Stewart’s crew realized that the Koch Industries was running a 30-second spot during their show, they had to do something about it.

In true Daily Show fashion, Stewart, aided by the disembodied voice of correspondent Samantha Bee, decided to tweak the ad a little. It was the least they could do for a pair of brothers they called “the next generation of robber barons.”

“Their ad did leave out a number of very, very small points, most likely for lack of time,” Stewart said. “So, to welcome them to the Daily Show advertising family, we did make some minor adjustments.”