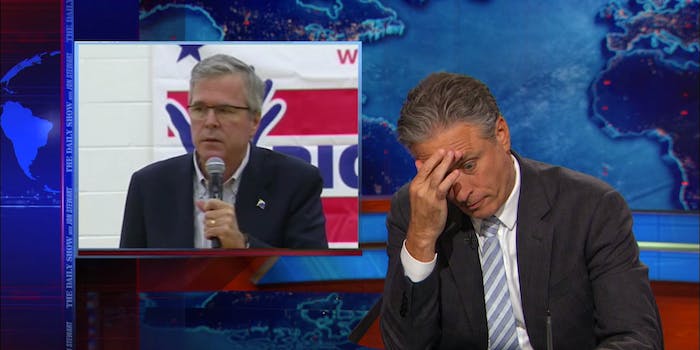 After being pressed about it several times, presidential hopeful Jeb Bush has finally admitted that he would’ve done things differently in Iraq than his brother, George W. Bush.

The former Republican governor of Florida is not having the best week. He accidentally admitted that he was running for president the day before he got confronted by a 19-year-old college student who told him, “Your brother created ISIS.” And then that pesky Iraq question keeps following him wherever he goes.

Bush’s evolution on the question of whether it was a mistake to invade Iraq evolved from agreeing with his brother and telling us it was disrespectful to the soldiers to speculate on it eventually led to admitting that “mistakes were made.” This left Jon Stewart to ask, “Was that so hard?”

“Mistakes are always made in life,” Stewart said. “Like when you’re young and foolish and you’re alone out in the fields on a hot summer night and you promise your brother he can be president first if he just helps you bury the body and never says a word.”

But why is someone who isn’t technically running for president (yet) getting all of these policy questions? Easy. He can raise more money as an unofficial candidate before he’s restricted to the rigid rules of campaign funding. Given that, it’s a wonder that more candidates didn’t wait to declare.