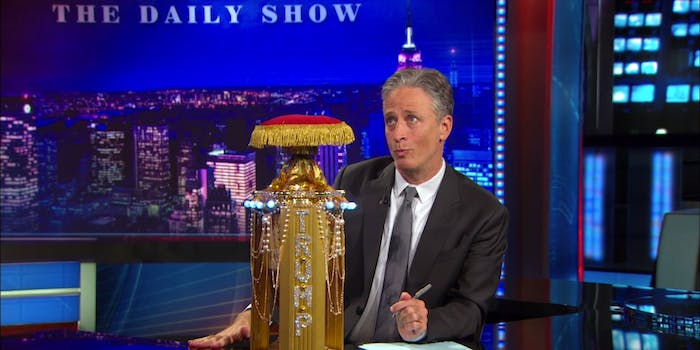 Help us Donald Trump, you're our only hope!

As with all entertaining stories that pass through the news cycle, Donald Trump‘s presidential campaign announcement was fun for a while, but now it’s time to move on.

But Jon Stewart felt the urge to return to the story while covering the controversial Trans-Pacific Partnership and how it has led to Republicans agreeing with President Obama Democrats opposing him.

The TPP is quickly becoming a big mess in Congress. It’s enough to make pets faint at the idea, Republicans use a Nazi metaphor, and Democrats quote Nancy Reagan. But the trade deal doesn’t exactly make for an exciting news story.

So Stewart, who was still coming off of his orgasmic Trump high, came up with a backup plan. Every time he felt hopeless, he pressed a button that played some of Trump’s announcement speech to make himself feel better.

We imagine he’ll be pressing that button many, many times in the weeks to come.