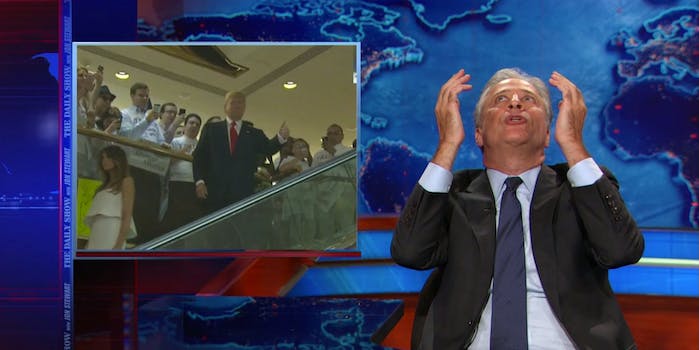 He called it 'the most beautifully ridiculous jibber-jabber ever to pour from the mouth of a batsh*t billionaire.'

Jon Stewart got his wish on Tuesday, and no one is more upset than him that he won’t be around to cover it.

Because it finally happened. Donald Trump, or has Stewart has called him, Fuckface von Clownstick, announced his presidential run. And the Daily Show host loves everything about it. He’s just so happy, you guys.

“America’s id is running for president,” he said. “Trump is the part of your brain that’s like at 3 a.m. going, ‘let’s go take a shit in a mailbox.'”

Stewart’s colleagues are just as ecstatic as him, too. He’s going to be doing the whole campaigning thing just like the rest of the candidates for however long he’s in the race, and they’re going to be making fun of him every step of the way. It’s orgasmic and effortless—a comedian’s wet dream.

Stewart has six weeks left behind the desk. He’s going to have the time of his life in his “comedy hospice.”