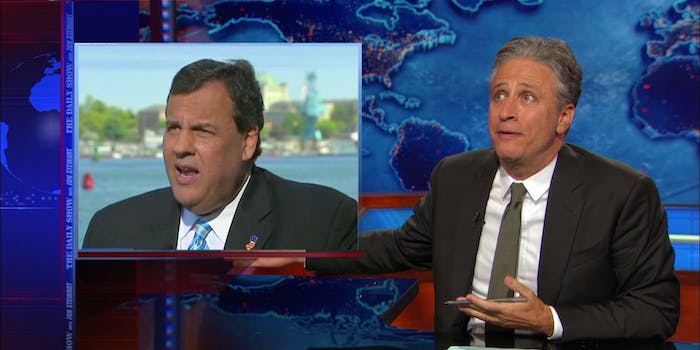 The 2016 presidential election has become a bloated beast, with more than a dozen different candidates just on the Republican side fighting for one nomination.

It’s leading to a giant market of unnecessary branded items and desperation, especially from Sen. Ted Cruz, who gave a cringe-worthy Simpsons audition for BuzzFeed. For Jon Stewart, Cruz proved that he didn’t even need to win the election to ruin something that Americans hold dear.

To make matters worse, Stewart says, New Jersey Gov. Chris Christie has joined the race, making it even more crowded. Christie’s got brass ideas, a questionable track record, the Bridgegate scandal, and a full 65 percent of New Jersey residents who don’t think he’ll make a good president—which he actually believes is because the people want him to stay.

But his worst offense for Republicans? Not any of the terrible things he did for the state but something much worse in their eyes.

“When Barack Obama arrived to lend aid to your hurricane-ravaged state, you shook his hand,” Stewart said. “Why did you not slay him in a Klingon honor dual? It’s what Ronald Reagan would have done.”