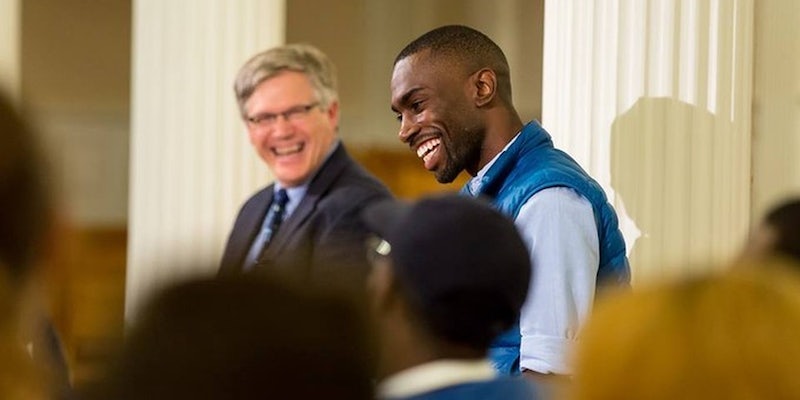 Waters said he was impressed by McKesson's 'surprisingly detailed platform.'

Waters kicked off the video with a joke referencing his trashy, outsider reputation, saying, “I realize many candidates wouldn’t want my endorsement.” He then nodded to his friendship with the current mayor and to recent uprisings over police brutality that shook the city.

“I’m not sure what I can do to help Baltimore with its problems these days,” he said. “So why not let somebody younger and more radical than I am have a crack at it?”

Waters, whose credits include Hairspray, Cry Baby, and a slew of cult ’70s films featuring LGBT icon Divine, has lived in Baltimore since his birth there in 1946.

McKesson’s organizing in Baltimore and in Ferguson, Missouri, in response to the police killings of Freddie Gray and Michael Brown, respectively, earned him fame as a civil-rights activist, alongside his organizing partner Johnetta Elzie. He launched a campaign for mayor of Baltimore in February and has raised more than $250,000 through a CrowdPac site that tracks donations in real time.

Waters first hinted at an endorsement during a March 18 keynote address at the 2016 LGBT Media Journalists Convening at Baltimore’s American Visionary Art Museum.

McKesson, who is gay, was featured on the cover of the February edition of the Advocate. Waters has been openly gay during his entire career.

As McKesson revealed in a followup tweet, the two Baltimore natives met in person to discuss the campaign and the issues that the city faces.

John Waters is incredible, y'all. We had a great conversation about the future of Baltimore. pic.twitter.com/sC2A4D4gTp

McKesson’s endorsements are unusual for a political candidate but reflect a distinct base of support from the LGBT community. The parent company of gay social apps Jack’d and Manhunt also endorsed McKesson on Tuesday and made a $6,000 donation to his campaign.

Hector Camacho, CEO of app-maker Online Buddies, explained that the endorsement was part of the company’s just-launched “Change the Game” campaign, which channels its support toward community members and projects that are “challenging the ways in which people live and identify.”

“DeRay Mckesson is a voice for this generation,” Camacho said. “His passion, activism and relentless commitment for justice have forced the nation to reflect and respond. We applaud DeRay’s courage and dedication in the demand for equal rights, not only in Baltimore, but throughout the nation.”