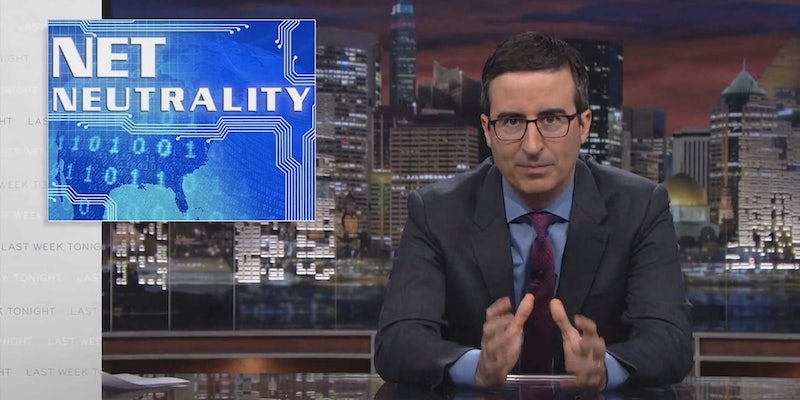 “If you want to do something evil, put it inside something boring.”

The campaign for net neutrality has an image problem. It’s not that people disagree with it, or campaigners have been beset by scandal—no, it’s just dull.

Start talking about net neutrality and your audience will swiftly switch off. As host of HBO’s Last Week Tonight John Oliver puts it, “the only two words that promise more boredom in the English language are ‘featuring Sting’”.

And this is an issue, because net neutrality—the principle that “all data has to be treated equally”—is essential to the open Internet we all know and enjoy today. But now the Federal Communications Commission (FCC) is mulling over proposals to destroy that, by allowing Internet Service Providers (ISPs) to charge companies for preferential treatment.

In Oliver’s words: “The internet in its current form is not broken—and the FCC is taking steps to fix that.” Luckily, the comedian has other ideas.

In Sunday night’s episode of Last Week Tonight, Oliver put out a call to arms to Internet commenters, begging them (i.e. you) to let the FCC know what they think of the agency’s proposals to divvy up the Internet into “fast and slow lanes”.

The reaon most people aren’t already protesting the potential death of net neutrality, says Oliver, is that “if you want to do something evil, put it inside something boring.” For all the jokes about coyote urine and cat photos, Oliver is deadly serious. Watch the video here:

And now take action by going to FCC.gov/comments, and let the agency know what you think about the plans to ruin our free and open Internet.