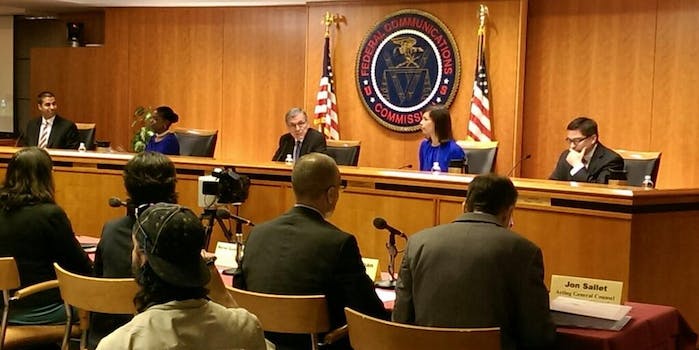 “There is one Internet: It must be fast, it must be robust, and it must be open."

The Federal Communications Commission (FCC) has adopted a new rule-making proposal on net neutrality that it says will “protect and promote the Internet as an open platform,” but the proposal fell short of the safeguards for an open Internet that many activists seek.

Three of the five commissioners supported the new rules proposal, which largely seeks to reinstitute the FCC’s previous net neutrality rules from the Open Internet Order of 2010. The proposal could allow for a so called Internet “fast lane,” through which Internet service providers (ISPs) could charge content companies for faster data delivery to customers.

Under the proposal, broadband providers would have to adhere to “commercially reasonable practices” and it will seek public comment and further explore “whether paid prioritization should be barred altogether.”

FCC Chairman Tom Wheeler was emphatic that he was very much against paid prioritization, though reports in recent weeks have suggested otherwise.

“There is one Internet: It must be fast, it must be robust, and it must be open,” Wheeler said at the meeting. “The prospect of a gatekeeper choosing winners and losers on the Internet is unacceptable.”

Commissioners Mignon Clyburn and Jessica Rosenworcel joined Wheeler in support of the proposal, while Ajit Pai and Michael O’Rielly dissented.

O’Rielly called the proposal “hopelessly vague and unclear” and said that he believes network prioritization could actually serve consumers.

The new rule-making process follows a January decision from the U.S. Court of Appeals in Washington, D.C., that struck down the FCC’s previous open Internet rules. The court ruled that the FCC does not have the authority to regulate Internet service providers because they are not classified as telecommunications companies and thus not subject to so-called “common carrier” laws.

Thursday’s proposal was also noncommittal on if and how the FCC would seek to reclassify broadband providers, though Wheeler has repeatedly said that the option is on the table, and the Commission can still decide later to do so.

The audience, largely filled with open Internet activists, seemed to collectively groan at the part of the proposal that indicated the commission preferred to rely on Section 706 of the Telecommunications Act of 1996 to govern ISPs, as opposed to reclassifying them as Title II common carriers.

Open Internet group Fight for the Future, which camped outside the FCC building for more than a week leading up the meeting, had a mixed response to the proposal’s adoption.

Make no mistake, the @FCC proposal that passed just moments ago does not ensure #realnetneutrality. Title II reclassification, nothing less.

Internet, you should be proud. This @FCC proposal is still severely lacking, but it’s way better than would have been without #occupythefcc

After the meeting started with several activists standing up to sound off for net neutrality before being led out of the room, Wheeler tried to emphasize that no final decisions would come down at Thursday’s meeting.

“The purpose of what we’re doing today on the open Internet is to make sure we hear from everyone and to start a process that fully opens the doors for comment by the American people,” Wheeler said. “Disruption doesn’t help getting to the point where the American people can provide input into the process.”

While the proposal did not offer many hard-and-fast answers, it did include a few new potential safeguards for net neutrality such as the possibility of appointing an ombudsperson to “act as a watchdog for consumers, startups, and other small entities.”

The proposal also seeks to build upon previous transparency rules, which compel ISPs to disclose details about how their networks operate to ensure they are adhering to whatever open Internet rules are ultimately put in place.

Now that the proposal has been adopted, there will be a 120-day public comment period before the FCC adopts new rules. Use this form if you wish to submit a comment on the FCC’s proposal.

Updated with reaction from Fight for the Future.

Photo by the FCC via @GigiBSohnFCC/Twitter