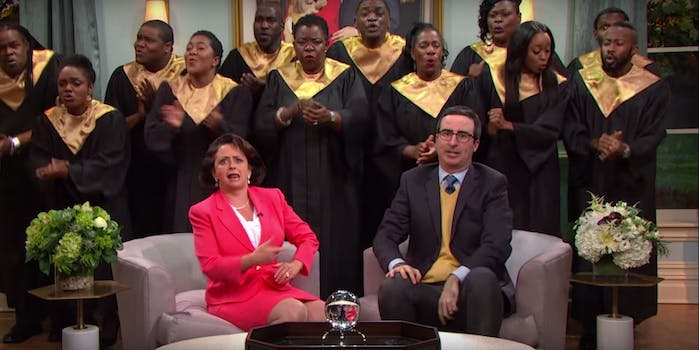 If you're watching his show, you're already part of the flock.

Congratulations to any regular viewers of Last Week Tonight—you’re now a member of an evangelical church.

Money-hungry TV preachers were the latest scourge on humanity to wind up in John Oliver‘s crosshairs, in a segment on Sunday’s show that ended with him forming his own tax-exempt church.

Oliver had a bone to pick with televangelists who preached “seed faith,” the idea that donations to the church were “seeds” leading to future wealth. Several evangelist preachers have become massively wealthy using this philosophy, while vulnerable members of their congregation wait for terminal illnesses to be cured by God or for that seed money to turn into a fortune.

To make matters worse, these churches are rarely investigated for potential scams. They’re even given tax-exempt status by the IRS.

Because the tax-exemption rules for evangelical churches are so vague, John Oliver decided to test them by setting up his own church. Welcome, brothers and sisters, to Our Lady of Perpetual Exemption.

We’re excited to see what John Oliver does with all the donations to his fake church. It’s like Stephen Colbert’s Super PAC all over again.