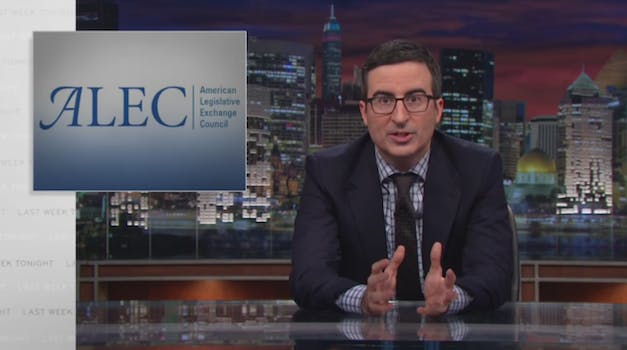 This is one reason why your state's politics are so freakin' weird.

One of the most powerful forces in American politics has finally earned the ire of Last Week Tonight‘s John Oliver.

In his latest segment, Oliver went after the American Legislate Exchange Council (ALEC), an ultra-conservative lobby that essentially writes legislation for state lawmakers who are too lazy (or too desperate for campaign contributions) to legislate with integrity. Bills modeled on ALEC proposals have become law all over the United States, targeting issues like abortion, education, immigration, and “Stand Your Ground” self-defense rights.

“State legislatures are hilarious,” Oliver said. “There’s only one problem: Increasingly, they’re the places where most legislation is actually taking place.”

Because of ALEC’s involvement in a number of political battles that Oliver has covered—including Arizona’s draconian immigration law and deceitful payday loan practices—Oliver said he was “going to list ALEC in the credits for our show as Associate Producer of Creating Horrifying Things For Us To Talk About.”