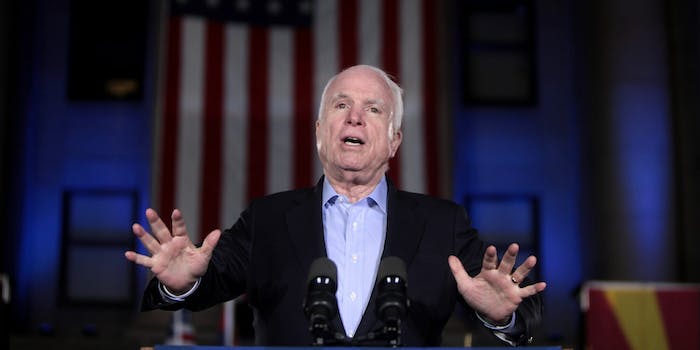 Not all of the remembrances were positive.

Sen. John McCain, 81, died on Saturday after a battle with brain cancer, and the internet is in mourning.

McCain represented Arizona in the Senate for 35 years, after serving as a Naval officer in the Vietnam War. After his plane was shot down, he was captured by the North Vietnamese Army and tortured in the infamous “Hanoi Hilton” for five years.

McCain was diagnosed with glioblastoma, a particularly aggressive form of brain cancer, in July 2017; his family announced on Friday that they had discontinued medical treatment.

After his death was announced Saturday night, Twitter predictably overflowed with tributes, including this one from Barack Obama:

Our statement on the passing of Senator John McCain: pic.twitter.com/3GBjNYxoj5

“Few of us have been tested the way John once was, or required to show the kind of courage that he did. But all of us can aspire to the courage to put the greater good above our own. At John’s best, he showed us what that means,” the former president said in a statement.

Hillary Clinton remembered the senator, too:

.@SenJohnMcCain lived a life of service to his country, from his heroism in the Navy to 35 years in Congress. He was a tough politician, a trusted colleague, and there will simply never be another like him. My thoughts and prayers are with Cindy and his entire family.

As did Joe Biden, whose son Beau also died of brain cancer:

John McCain was many things – a proud graduate of the Naval Academy, a Senate colleague, a political opponent.

But, to me, more than anything, John was a friend. He will be missed dearly. pic.twitter.com/AS8YsMLw3d

President Donald Trump, who memorably said that he didn’t think McCain was a war hero because he was captured, sent his condolences as well.

My deepest sympathies and respect go out to the family of Senator John McCain. Our hearts and prayers are with you!

Presidents Obama and George W. Bush have been asked to deliver eulogies; McCain previously had requested that Trump not be invited to his funeral.

McCain will lie in state in both Arizona and a the U.S. Capitol before his burial in Annapolis, Maryland, where the U.S. Naval Academy is located.

Not all of the remembrances were positive, though. Some recalled McCain’s less-than-heroic deeds.

The country that accepted Sarah Palin gave us Donald Trump.

Y’all are going to say “IF YOU DON’T HAVE ANYTHING NICE TO SAY….”

…and prove my point.

do the straight people praising John McCain know that we can hear them i am just curious pic.twitter.com/f621RDorcN

McCain voted against a holiday memorializing Dr. Martin Luther King, Jr. in 1983, but he said his position had changed during his 2008 presidential run.

McCain also voted for the Defense of Marriage act in 1996; in 2013, he still supported the law.

McCain leaves behind his wife, Cindy, and his children Meghan, Bridget, Sidney, John IV, and James.