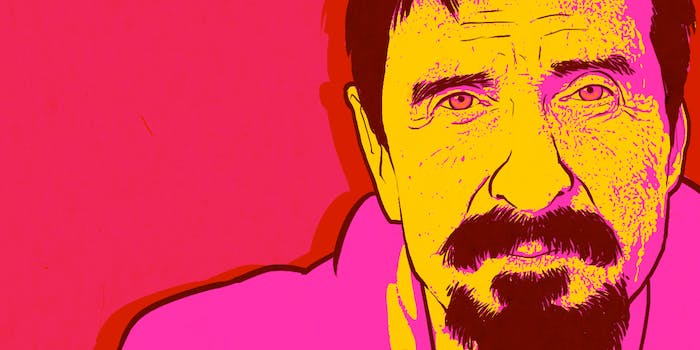 He wanted to say 'something sensational.'

John McAfee isn’t telling you the truth—but he says he’s lying for a good cause.

McAfee has been on a media tour discussing a court order that directs Apple to write custom code to help the FBI access a terrorist’s iPhone. The method McAfee says he would use to break open the phone, he admitted to the Daily Dot, is false.

McAfee, who founded of one of the first companies to offer antivirus software, claimed on CNN and Russia Today, as well as in a Business Insider column, that he could bypass the advanced encryption protecting the iPhone without Apple’s help. But he lied in those interviews, he told the Daily Dot, to “get a shitload of public attention.”

Further, the method McAfee says is real—the one he says he’s lying to try to hide—is neither a secret nor feasible for anyone to accomplish without expensive tools and specialized skills. Even then, experts believe it would be difficult and would risk destroying the data the FBI is fighting so hard to access.

“Now, what I did not lie about was my ability to crack the iPhone. I can do it. It’s a piece of friggin’ cake.”

Apple has the ability to write custom software that would allow the FBI to brute force its way into San Bernardino shooter Syed Rizwan Farook’s iPhone without triggering a self-destruct security feature. But it must do so by authorizing the specialized version of iOS with a signature Apple exclusively holds.

FBI Director James Comey said during a congressional hearing on Tuesday that his office had requested the help of the entire U.S. government but that he did not find a viable solution for breaking into the iPhone without demanding Apple’s assistance.

McAfee said he bent the truth in order to push back against the official narrative.

“By doing so, I knew that I would get a shitload of public attention, which I did,” McAfee said. “That video, on my YouTube account, it has 700,000 views. My point is to bring to the American public the problem that the FBI is trying to [fool] the American public. How am I going to do that, by just going off and saying it? No one is going to listen to that crap.

“So I come up with something sensational,” he continued. “Now, what I did not lie about was my ability to crack the iPhone. I can do it. It’s a piece of friggin’ cake. You could probably do it.”

McAfee first admitted to lying in an interview with Inverse.The software company executive offered to tell the Daily Dot his secret method for cracking an encrypted iPhone, something that experts say cannot be done without Apple’s authentic digital signature, but only if the Daily Dot promised to “not publish this publicly or tell anybody else.”

The Daily Dot declined to make such a promise in order to keep the entire conversation on the record.

Later in the interview, McAfee described his method, which involves “decapping” the phone’s processor and acquiring the device’s unique identifier (UID), that may allow someone to brute force the phone’s password—guess the password by flooding it with options—at a faster rate. Despite his insistence that the Daily Dot not publish this technique, McAfee has explained the method in previous media interviews.

Some experts believe, however, that McAfee’s theory doesn’t make much sense. Ars Technica explained why:

Thus far, the most plausible method for decrypting the San Bernardino iPhone without Apple’s assistance involves manually inspecting the handset’s processor using acid and lasers. Done correctly, this would let the FBI learn not the PIN, but the device’s unique hardware ID. With that ID, they could combine it with each of the PINs in turn until they hit upon the right one. The cost and complexity of this technique would be extremely high, and it would be extremely risky: one wrong move and the hardware ID would be destroyed permanently, making the phone’s data permanently and irrevocably lost.

When asked why he was discussing this method on the record, McAfee said, “Because I’m assuming, because you kept on asking, that you aren’t going to publish it.”

When the Daily Dot pointed out that McAfee had never secured such a promise, he said that the conversation was over and hung up.

“The lie was an exaggeration of simplicity,” McAfee said in a text message after the interview. “As the Inverse article explained, it would have been impossible in the time allowed to explain the fullness of the truth. If you fault me for that, then you, and possibly your readers, will have been the only one on the planet to have done so.”

McAfee also said, “I apologize for my anger.” He added that it “seemed absurd to me to focus on a simplification of a technique, given the stakes at risk—a potentially Orwellian state initiated by the populace ignoring the truth of what the FBI is trying to do to us.”