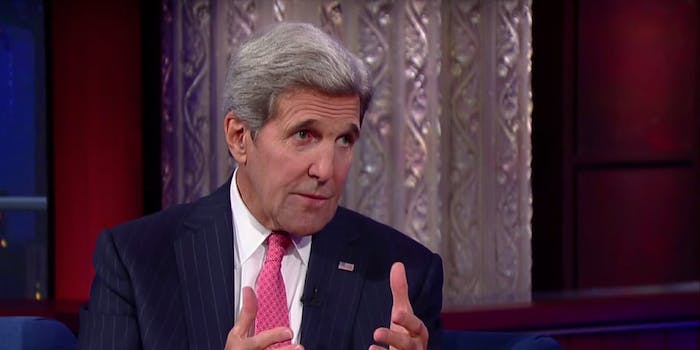 Not getting the deal, Kerry said, would have led to military conflict eventually.

Secretary of State John Kerry took Stephen Colbert behind the scenes of the Iran nuclear deal on Thursday night.

In an interview on The Late Show, Kerry explained the high stakes of the deal, which would lift financial sanctions on Iran if it adheres to new limits on its nuclear program. He told Colbert that not getting the deal would have eventually led to war. After Kerry’s experiences in Vietnam, he said, he vowed never to send men and women to war except as a last resort.

“Our perception is it wouldn’t have been war at day one or immediately, but if Iran continued to enrich and Israel and other countries in the region saw them doing that, then the pressure was going to mount inexorably to have to do something about it,” Kerry said. “And if you’ve tried negotiation and have failed or you can’t negotiate, you then wind up being pressured towards conflict.”