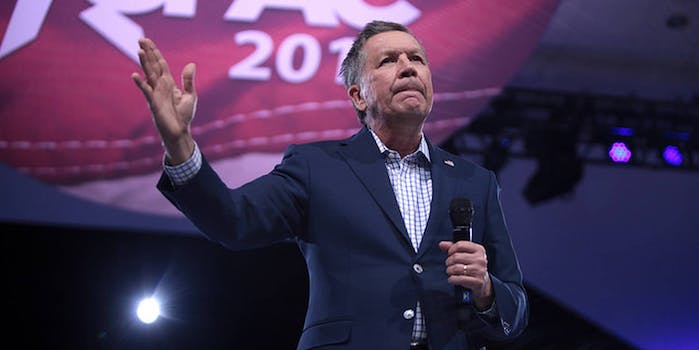 He definitely didn't vote for Trump.

John Kasich voted by absentee ballot on Monday, and he used the opportunity to take a parting shot at Donald Trump.

The Ohio governor wrote in Sen. John McCain, the 2008 GOP presidential candidate and the target of many of Trump’s outbursts of the past year, on his ballot, Kasich spokesman Chris Schrimpf confirmed to the Cincinnati Enquirer.

Kasich ended his bid for the Republican nomination in May, after months of bitter feuding with Trump. He sat out the GOP convention, despite it taking place in his home state, and vowed after Trump’s 2005 Access Hollywood comments went viral to not support his presidential bid. He called Trump “a man I cannot and should not support,” in a statement released shortly after the hot mic recording rocked the 2016 election.

“The actions of the last day are disgusting, but that’s not why I reached this decision. … I will not vote for a nominee who has behaved in a manner that reflects so poorly on our country. Our country deserves better.”

Kasich reportedly voted straight-ticket Republican with the rest of his ballot, and he’s doled out $2,700 from his political action committee, Kasich for America, to each Republican candidate in competitive Senate races.

The move could still have an impact on Election Day. USA Today notes that no president since Abraham Lincoln in 1860 has won the presidency without taking Ohio.