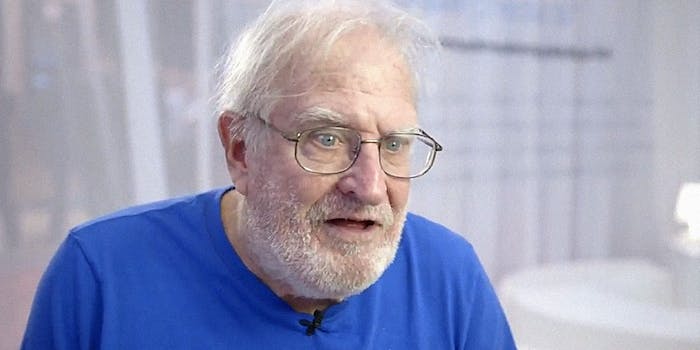 Draper denies sexual assault claims but says he may have been aroused during 'energy workouts.'

John Draper, a pioneer in the world of hacking, denies sexually assaulting multiple men while performing so-called “energy workouts,” insisting the exercises were not sexual in nature while also acknowledging that he may have become aroused while performing them.

On Friday, BuzzFeed News detailed the accounts of two men who say Draper initiated unwanted sexual contact at hacker conventions in 1999 and 2000. One of the men described Draper’s actions as sexual assault. Six other men told BuzzFeed that Draper “habitually” approached young teenage men at hacker conferences between 1999 and 2007, offering them what both Draper and his alleged victims called “energy workouts” or “energy exercises.” The testimonials illuminate publicly for the first time what some have described as an open secret in the hacker community and have inspired others to come forward with allegations against Draper.

Draper, 74, has long been considered a celebrity of sorts in hacking circles for his integral role in the “phone phreaking” movement in the 1960s, his brief work at Apple during the company’s early years, and his privacy activism in the 1990s. Well-known by his pseudonym, Captain Crunch, Draper became a mainstay at hacker conventions, both as a speaker and a general attendee, where young hackers, mostly men, reportedly fawned over him. BuzzFeed writes that Draper “used his status at cybersecurity conferences to arrange private meetings with teenage fans,” urging them to take part in “energy workouts”—the techniques of which, according to multiple accounts, were used to initiate deliberate and nonconsensual sexual contact.

“I apologize if my exercise program caused anyone to feel uncomfortable in any way. That was never my intention,” Draper told the Daily Dot in a video-call interview. “If something was perceived as sexual or creepy in any way, that is one thing. But there was nothing intentionally or explicitly sexual towards anyone.”

Draper said these “energy workouts” were an “applied kinesiology exercise” taught to him in 1990 by a team of Californian medical professionals to help him cope with the pain and immobility caused by a difficult spinal injury. The practice of applied kinesiology is an alternative—and scientifically disputed—chiropractic therapy for muscle strengthening and stimulation. Draper claims it helped him, and he became an advocate of the practice.

“It was a series of techniques, which I loosely called ‘energy blockage removal,’” he said. “It consisted of muscle stimulation using applied kinesiology, interspersed with traditional exercises such as squats and push-ups, with weight applied, either by carrying weights if there are any available, or if the friends had enough leg strength, carrying my bodyweight, or vice versa until I was no longer physically able.”

While denying they were a ruse to engage in nonconsensual sexual contact, Draper acknowledged that he may have become erect while performing some of the energy workouts, which reportedly involved leg massages and jumping on the participant’s back.

Draper refused, via a spokesperson, to respond to any questions from BuzzFeed regarding the allegations. In an apparent attempt to clear his name, Draper’s team insisted on speaking to the Daily Dot for approximately 45 minutes about his medical status before allowing the interview with Draper to proceed.

Journalist Ethan Smith, now the Los Angeles bureau chief for the Wall Street Journal, told BuzzFeed he was working for a publication called Industry Standard in 2000 when he was offered an interview with Draper at the Hackers On Planet Earth conference in New York. According to Smith, Draper suggested that the interview take place in his hotel room since the lobby area where the two had met was noisy

When the pair sat down in the hotel room to commence the interview, Smith said, Draper began to describe his energy workouts while touching his legs.

“He starts doing this weird thing where he’s kind of massaging my thighs up and down. It didn’t feel particularly sexual. It was just weird,” Smith told BuzzFeed. “This guy’s a known eccentric. I was just clueless about what was happening here.”

Smith continued: “He climbs on my back, wants me to give him a piggyback ride, carrying him up and down in the room. I’m still not getting what’s happening. I could feel he had an erection, that he was grinding against my back.”

That time I tried to interview John Draper, the hacker better known as Captain Crunch, and instead he sexually molested me. https://t.co/MVbyGkR5az

“Yes, that’s a possibility,” Draper told the Daily Dot. “There is a possibility that I might have had an erection because I am on the back; my pelvis is not really touching his lower back but is, you know, near there. He might have felt a bump—but how do I know that bump wasn’t something in my pocket?”

Draper expressed regret that his energy techniques may have made some “feel uncomfortable,” but he insisted that, contrary to the testimonies reported by BuzzFeed and his own admission of possible arousal, these sessions of physical activity were always consensual and non-sexual.

Pressed on whether he obtained consent to perform the exercises, Draper said he did his “best” to “make them aware” of what he planned to do by “explaining the gory detail of what was going on and what was involved.”

“They had plenty of opportunities to decline the activity, no problem,” he said.

In a second testimony to BuzzFeed, James Erickson said he met and exchanged contact information with Draper at a rave in the late 1990s. Erickson was a teenager at the time. Draper, Erickson said, persistently contacted him to ask him to take part in his “energy workouts.”

“He was always asking if I wanted to hang out and try this bullshit energy work thing,” Erickson told BuzzFeed. “I just kinda kept putting him off. Stupid, I didn’t see any red flags.”

When the two met again at DEF CON, an annual hacker convention in Las Vegas, around 1999 or 2000, Erickson said, Draper took him back to his hotel room where he was encouraged to participate an energy workout.

“He had me pick up chairs and heavier things across the table, doing pushups, basically until my arms and legs were getting sore,” Erickson said. “I started getting sweaty: ‘Oh, just take off your shirt.’”

It was at this weakened point that Erickson claims Draper jumped on his back—an advance he said was unexpected, unwanted, and sexually motivated. Erickson quickly left.

“It did seem pretty rapey,” Erickson told BuzzFeed. “I would just consider it sexual assault. He may have been grabbing himself while I was doing the exercise … he was wearing sweatpants and I think he took off his shirt.”

When asked about Erickson, Draper said he didn’t recall meeting him. “At rave parties, I meet so many people,” he said. “There was nothing in my mind that gave me the impression that I should remember these individuals. They were people at an event.”

Draper further denied that he offered “private energy work out” sessions to young men for his own sexual gratification or pursued young men seeking their participation, in particular, when asked about inviting a teenager to his hotel room.

“I have met and spent time with many people of all ages and identities. I reject the notion that I, for any reason, favor men.” Draper said.

According to BuzzFeed, Draper’s intense behavior toward young conference attendees and enthusiastic “energy workout” proposals drew the attention and response of event staff. Past conference volunteers at DEF CON said they were given the responsibility of ensuring that he was kept away from young attendees. A former volunteer for ToorCoon, another hacker event in San Diego, recalled escorting Draper from a private party, as does a former DEF CON organizer.

“I’ve forced his removal from events or otherwise denied him entry to events specifically in response to his behavior toward younger hackers,” Matt Lewis, who previously organized events at DEF CON, told BuzzFeed. “What I’ve seen with my own eyes is him behaving inappropriately around teenagers in the hacker community, and having a harem of young hackers that kind of bubble around him because he plays up the hero card.”

Draper denied this account as well, saying he doesn’t “recall ever being removed for that reason.”

In the weekend following BuzzFeed’s article, Draper has been dropped from at least one speaking engagement and was reportedly banned from the DEF CON cybersecurity conference.

The public relations team at Redwire, which is representing Draper’s autobiography Beyond the Little Blue Box, released an official statement extending “sympathy and compassion for those who have experienced John in a negative way and feel victimised by his exercise program.”

On Saturday, the team’s PR consultant, Ray Johansen, said he “amicably parted ways” with the project team in light of the allegations. Meanwhile, the public reaction to the article has resulted in a withdrawal of support for the autobiography’s Kickstarter campaign, which raised just under $30,000.

It has also emboldened others, including cryptography professor Matt Blaze, to come forward with their own testimonies about Draper’s past behavior.

Blaze tweeted that, as a young man, he declined to participate in Draper’s proposed workout and, as a result, became the victim of a prolonged “stalking” campaign in which he says the older hacker tapped his home phone line and on one occasion even “claimed to be a relative to take [him] out of school.”

A spokesperson for Draper told the Daily Dot that the PR team was “stunned” by Blaze’s story.

“Our team is, simply put, stunned by the allegations Mr. Blaze makes,” the spokesperson said. “Given the serious nature of the allegations, if provided with more specific details and facts, we would investigate.”

Update 12:15pm CT, Dec. 8: BuzzFeed News reports that, since initially publishing details of allegations against Draper on Nov. 17, three more men have come forward with similar allegations of sexual misconduct against the hacker, including noted cryptographer Matt Blaze, who detailed a series of stalking incidents on Twitter.

BuzzFeed News also spoke with Craig Ellenwood, who says Draper sexually assaulted him in a VIP room at a rave in 1991. “He spun around and forced me to the floor, lay on top of me, and told me these are the exercises he needs to feel better,” Ellenwood told reporter Kevin Collier. ““I was still on the floor facing down, and he was on my back, arms wrapped around me, and I could feel his penis getting erect, pressing on my leg and thigh.”

“Mr. Draper offers a sincere apology if anyone has ever misunderstood his intentions and as a result feel they have encountered him in a negative capacity,” she said. “Mr. Draper rejects any claims of sexual misconduct or assault, as well as any claims whatsoever involving nefarious intent or deeds posted on any social media platform at any time.”

BuzzFeed also confirmed that two autism nonprofits, in light of the accusations, have refused to accept Draper’s proposed donation of 5 percent of his new book’s profits. Draper announced that he had been diagnosed with the condition in a statement released one day prior to the publishing of the first allegations by BuzzFeed.