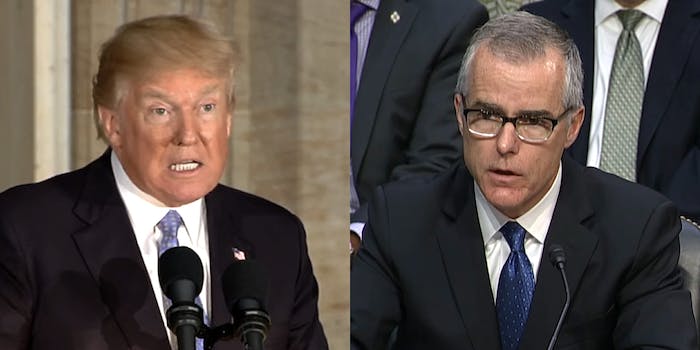 One of President Donald Trump‘s top lawyers, John Dowd, said that it was time for the Justice Department to end its investigation into the president after the FBI dismissed former Deputy Director Andrew McCabe last night.

Dowd said the Special Counsel and the FBI were “corrupted” and said he is praying it comes to an end.

“I pray that Acting Attorney General Rosenstein will follow the brilliant and courageous example of the FBI Office of Professional Responsibility and Attorney General Jeff Sessions and bring an end to alleged Russia Collusion investigation manufactured by McCabe’s boss James Comey based upon a fraudulent and corrupt Dossier.”

Dowd emailed that statement to the Daily Beast, saying he was speaking on behalf of President Trump. However, when reached later by the Washington Post, Dowd said that he was merely speaking for himself, walking back the implication that the president wanted the investigation to come to an end.

Dowd’s comments came in the wake of Attorney General Jeff Sessions firing McCabe last night, just hours before he was set to retire with full benefits. In his statement on firing McCabe, Sessions said he had both illegally disclosed information to the media and been dishonest under oath.

The Justice Department found “that Mr. McCabe had made an unauthorized disclosure to the news media and lacked candor — including under oath — on multiple occasions.”

It was an announcement met with glee from the sitting president.

Andrew McCabe FIRED, a great day for the hard working men and women of the FBI – A great day for Democracy. Sanctimonious James Comey was his boss and made McCabe look like a choirboy. He knew all about the lies and corruption going on at the highest levels of the FBI!

McCabe has been in the president’s crosshairs for months and was one of the officials involved in obtaining a FISA warrant to surveil former Trump campaign official Carter Page.

According to House Intelligence Committee chair Devin Nunes’ infamous memo, McCabe is one of the individuals who willfully deceived the FISA court about both the dossier’s provenance and its veracity.

He was also reportedly mentioned in the texts between FBI agents Peter Strozck and Lisa Page, who spoke about going to McCabe to create an “insurance policy” against Donald Trump

Republicans have seized upon both bits of information to show the FBI’s bias in conspiring at the highest levels to bring down Trump.