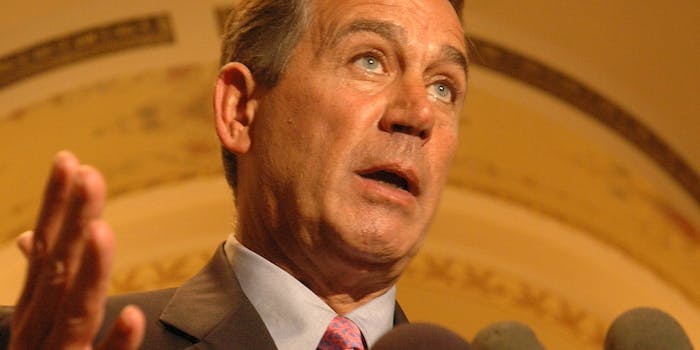 As the U.S. scrambles for answers for how it could have prevented the Amtrak crash that killed eight people and injured dozens more, Speaker of the House John Boehner (R-Ohio) knows who’s not to blame: Republicans.

“That’s a stupid question,” Boehner said to a reporter Thursday, after she’d asked him if his party’s fights against Amtrak funding contributed to the crash.

It’s no secret that a number of Republicans have long stood against using taxpayer funds to fund America’s woeful train system. To punctuate the point, the Republican-led House Appropriations Committee voted to cut the rail company’s federal funding by $252 million less than a day after the crash.

“The train was going twice the speed limit,” Boehner added.

According to the National Transportation Safety Board, if a more expensive system was in place, it likely would have prevented the crash. Board member Robert Sumwalt told the Wall Street Journal that while some Amtrak tracks have sensors to detect and slow speeding trains—the one that crashed was going around 106 mph, well over the 50 mph speed limit for that part of the track—there wasn’t a sensor installed on the curve where this train crashed. Additional funding could have enabled a temporary system that would have likely prevented the crash, the Journal reported.

Sumwalt added that Amtrak is working on installing a much better and more expensive system, called positive train control, regardless.