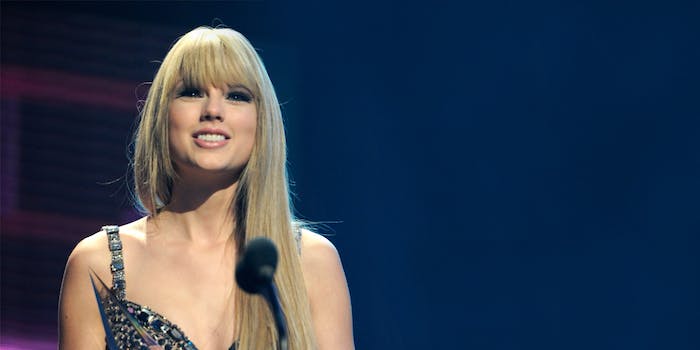 This is one way to attract attention from the #youths.

Speaker of the House John Boehner knows that he needs millennials to vote Republican. His staff also knows that millennials love Taylor Swift. So if you were a Boehner aide preparing a blog post attacking President Obama‘s new community-college proposal, how would you combine those two ideas?

You guessed it: a light-hearted partisan salvo composed of Taylor Swift GIFs. 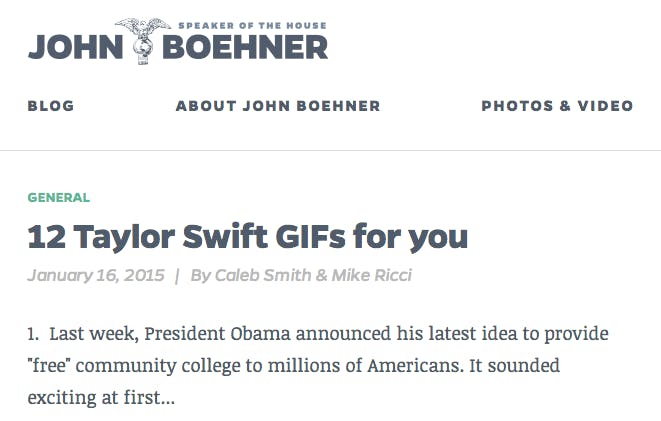 The blog post, titled “12 Taylor Swift GIFs for you,” delivers what it promises. Taylor Swift dances, smashes things, and smiles for the camera in between lines like “60 billion dollars is a lot of money… you can’t just shake it off” and “the president knows full well there’s no blank space in the taxpayers’ checkbook.”

Here’s the seventh GIF, in which Taylor responds to Boehner’s suggestion that Obama may pay for his plan by raising taxes.

And here’s the 11th GIF, which is accompanied by the line “Looks like an apology is in order, Mr. President…”

It’s unclear whether Speaker Boehner is a personal fan of Swift’s, or whether his office simply used her stardom to attract the #youths to this blog post.

“We are always looking for fun, effective ways to communicate with the American people about President Obama’s failed policies, and our better solutions,” said Boehner spokesman Michael Steel. “As Speaker Boehner says, ‘you have to reach people where they are.'”

Steel declined to comment on the speaker’s interest in Swift’s music.

It’s also unclear whether the speaker’s Swift-powered rhetoric will pay off. Gallup polling shows that 18- to 29-year-olds consistently vote for Democrats. A December poll by the Economist and YouGov found that 55 percent of people in that age range approved of President Obama’s job performance.

But maybe if Taylor Swift endorsed Republicans, millennials would tell Obama’s party, “We are never, ever, ever getting back together.”