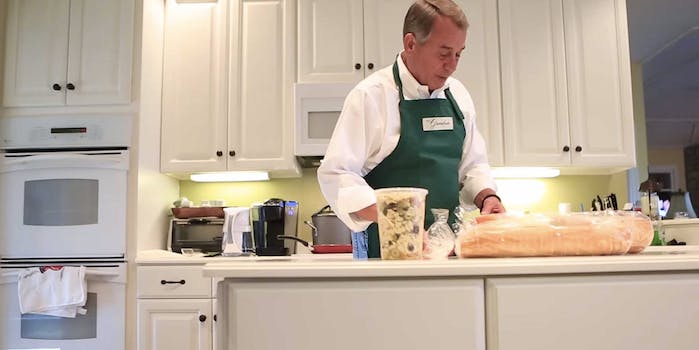 How to brine your Thanksgiving turkey, John Boehner–style

But what does he put in his eggnog?

If you’re prepping Thursday’s turkey, stop. Your recipe isn’t nearly patriotic enough. You want to be able to tell real Thanksgiving apart from Canada’s, right? So go with a tried and true cooking method that meets with the approval of Republicans in Congress—not an easy thing to come by.

House Speaker John Boehner (R-Ohio) recently took a break from pretending that anybody besides Internet commenters cares about Benghazi to explain his bird-brining system, and we have to admit, it sounds like a winner. Right up until he says, “it’s the resting time that really works,” reminding the viewer just how lazy this country’s legislature is.

Never too late to drop out of politics and become a judge on Chopped, man.