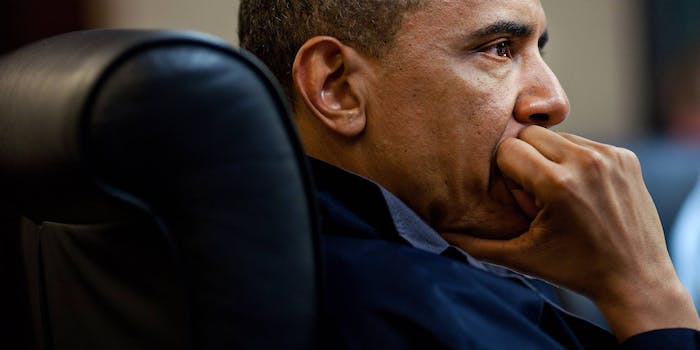 People across the country were shocked, outraged, and deeply saddened by the coordinated attacked on police officers in Dallas during a protest against police violence on Thursday night that left five law enforcement officials dead and six more wounded. As thousands upon thousands reacted on social media, one tweet in particular has drawn considerable attention.

Shortly after the shooting, former Republican congressman and current conservative radio host Joe Walsh tweeted, and then deleted, what many have construed as a direct threat against President Barack Obama.

Walsh’s tweet quickly engendered significant blowback from people who were, understandably, pretty touchy about things that could be read as encouraging people to commit acts of violence against public officials.

Joe Walsh needs to be arrested for threatening our President. STFU @walshfreedom

People are taking off the mask tonight. This is a now deleted tweet from former congressman @WalshFreedom. #Dallas pic.twitter.com/IMAOXnvgdL

Joe Walsh is literally hoping for the same thing that Charles Mansion was: a race war where 'his side' comes out on top

Hello @SecretService former congressman Joe Walsh has something to say about the president https://t.co/5Z2EOmcMwF

In the face of criticism, Walsh, who represented a district in the northwest Chicago suburbs from 2011 to 2013, deleted the tweet and posted a defense of himself in its place, insisting he didn’t intend his original message to be read as a threat.

I wasn't calling for violence, against Obama or anyone. Obama's words & BLM's deeds have gotten cops killed. Time for us to defend our cops.

Even though Walsh walked back that particular tweet, his other missives labeling Obama as personally responsible for the anti-police violence in Dallas remained up.

You did this Obama.

You did this liberals.

You did this #BLM.

Time to defend our Cops. Wake up. https://t.co/Zoc3x2xlMk

It's time 4 patriotic Americans to stand up & stand against all the Cop haters – from Obama to the thugs on the street.

In a press briefing held in Warsaw, Poland, Obama, who was in the country for a NATO summit called the attack, “vicious, calculated and despicable.”

“As I told [Dallas] Mayor [Mike] Rawlings, I believe that I speak for every American when I say that we are horrified over these events and that we stand united with the people and the police department in Dallas,” the president continued.

While many have expressed anger about Walsh’s comment, there is always another option.