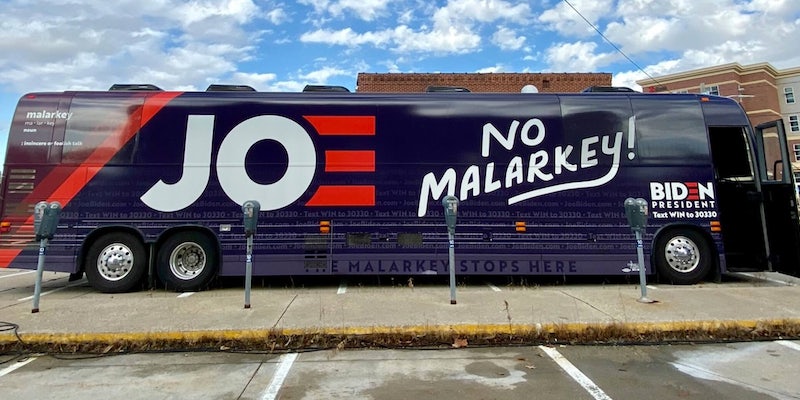 The Iowa tour is rich with viral moments.

It is day four of Joe Biden’s No Malarkey Iowa barnstorming bus tour. A vision dreamt up by the campaign where he would cruise across cornfields, removing dangerously high levels of malarkey across the state. He’d leave Iowa, previously drowning and drenched in insincere, foolish talk, back on dry ground and buoyed by non-stop real talk.

Fired up and ready to go for the #NoMalarkey barnstorm! pic.twitter.com/4lpU7waqzh

Unfortunately for Biden, the Joe Biden No Malarkey tour has contained a bit of, well, let’s just say… malarkey.

How much malarkey? You be the judge.

Sucking on his wife’s finger

YOU CAN'T MAKE THIS UP.

Joe Biden just NIBBLED on his wife's finger at a campaign stop in Iowa. pic.twitter.com/PcCqTMPJez

The No Malarkey Bus Tour pledges no foolish talk, and while publicly sucking on your wife’s index digit might be considered foolish, it certainly prevents you from saying anything in that moment, which given his onstage gaffes, might be in Biden’s favor.

An attempt at a time-fill at this Biden event at Buena Vista University after the previous speaker asked if she had to keep talking: “I don’t know what else to say,” she said, which brought us a “fired up and ready to go” chant pic.twitter.com/Id0aDyS0RT

As part of his Iowa barnstorming, Biden’s adopted one of Obama’s signature catchphrases—Fired up, ready to go—in another effort to campaign on the legacy of the 44th president.

Unfortunately, while Obama was able to bring the energy to entire arenas, it doesn’t have the same effect when done by a crowd of senior citizens in a viral video from a Biden event, regardless of how much they do love Biden.

While Biden is running as the best person to both bring back and relive the Obama years, one person hasn’t stood behind Biden in that effort: Barack Obama.

Perhaps he’s trying not to let the weight of his endorsement alter the primary, or he’s truly done with electoral politics.

Fret not, Biden, who is promising you no bullshit as he goes through Iowa, wants you to believe he doesn’t need Obama’s endorsement.

He is currently at the top of the polls without it, which might lend credence to his claims.

When asked about Obama’s comments that he doesn’t connect with voters, he said: “There’s truth to that.”

That’s some real deal no malarkey right there.

Had he put out the same health care plan as someone else, Biden asked reporters, “What would you have done to me? Torn my ears off. Absolutely. I’d be a plagiarizing no good, old man who did bum-bum-bum."

Pete Buttigieg’s dancing on healthcare has been well-documented. Biden’s hasn’t necessarily been more specific, and certainly not more detailed, kicking his campaign off the anodyne concept of “peace of mind” before pivoting to a Medicare buy-in.

Now, Biden is saying Buttigieg stole his plan. Buttigieg aides have countered that claim, but we are more concerned about how he closed out his argument saying he’d be pilloried for copying it.

“What would you have done to me? Torn my ears off. Absolutely. I’d be a plagiarizing no good, old man who did bum-bum-bum.”

Having pie for lunch

.@JoeBiden taking a couple local supporters out to lunch in Emmetsburg. He says his lunch is on the bus but said he’s gonna start with apple pie a la mode pic.twitter.com/v2NohaN806

You know what? Why not.

Is all that malarkey? Is it No Malarkey? The election, and the fate of this bus tour, is in your hands.

This story will be updated as Joe Biden’s No Malarkey tour continues.