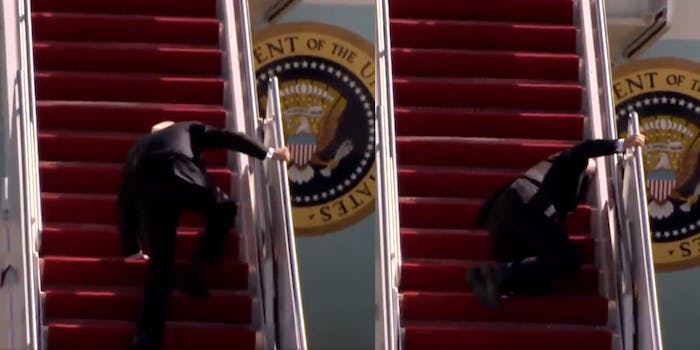 Conservatives and liberals are fighting over the significance of Biden's fall.

President Joe Biden tripped and fell while boarding Air Force One on Friday, leading to a wide range of reactions online.

While preparing to fly to Georgia, Biden was witnessed falling at least three times while walking up the stairs to his aircraft.

The fall, which Biden quickly recovered from, comes after the 78-year-old president broke his right foot while playing with his dogs last November.

Despite the previous injury, White House Principal Deputy Press Secretary Karine Jean-Pierre said that Biden is “doing 100 percent fine” and appeared to blame the wind for the accident.

But the internet, as is seemingly always the case, quickly decided to frame the tumble as some sort of monumental political moment.

Conservatives, who just this week claimed that Biden was actually a CGI animation, pointed to the fall as evidence of the president’s frail state.

“No one in history has ever fallen up the steps!” @pr_conservative falsely claimed. “Joe Biden has become the first person in history to fall up a flight of steps.”

Others pointed to what they felt was hypocrisy from the media, which questioned former President Donald Trump’s health after he walked slowly down a ramp following a commencement speech at West Point last year.

“I’m reminded of that week back in June 2020 when corporate media obsessed over Trump walking slowly down a ramp,” @danny_hellman said.

Old comments in which Biden mocked Trump for not being able to “run up ramps” also made a comeback.

Some Trump supporters turned the moment into a meme, creating video that showed Biden falling after being struck by the former president’s golf balls.

Other memes placed Biden in a motorized chair, the type often used by the elderly to travel up flights of stairs.

But many also argued that the news, which resulted in the term #Bidenfall becoming a top trend on Twitter, was being blown out of proportion.

“You know it’s a slow news day when all the media can talk about is the president tripping on a couple steps,” @mbphwx said. “Riveting stuff.”

Several users likewise argued that Biden’s fall was hardly newsworthy and instead opted to praise the president for “restoring our country to its former glory.”

The discourse on Biden’s fall is as you’d expect in modern online America, based entirely on political affiliation and devoid of any real substance.