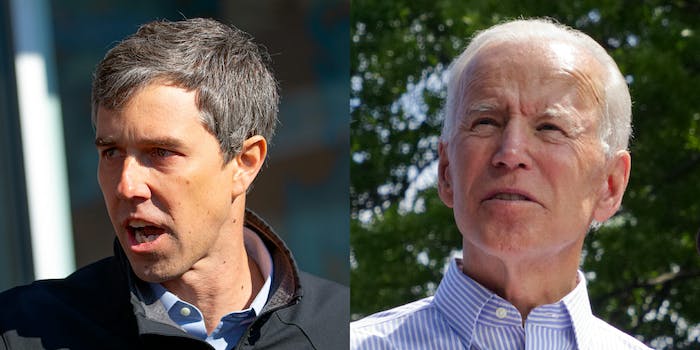 Yesterday, the New York Times published a large story about the numerous missteps in former Vice President Joe Biden’s 1988 presidential run, including his history of plagiarizing speeches that ultimately sank his campaign. Today, Biden released his plan to tackle climate change, the first major policy rollout for his 2020 campaign.

What do these two things have in common?

Biden’s plan for a “Clean Energy Revolution and Environmental Justice” has a heck of a lot of similarities to one just released last month, by another candidate, former Rep. Beto O’Rourke (D-Texas).

We are in a climate emergency and we must take drastic action now to address it. So today, I’m announcing my plan for a Clean Energy Revolution and Environmental Justice.https://t.co/FbsOsyQkIo pic.twitter.com/SBDrdiFu2C

It’s likely they’re just coincidences, given that a lot of the broad strokes are always going to overlap on a program this big and universally desired by the party, but both promise to re-enter the Paris Climate Accords on Day 1 of their administration and both promise investments of $5 trillion to fight climate change over 10 years. That’s not all.

Even the breakdown of their funding is eerily similar…

O’Rourke: Beto will launch a 10-year mobilization of $5 trillion directly leveraged by a fully paid-for $1.5 trillion investment — the world’s largest-ever climate change investment in infrastructure, innovation, and in our people and communities

Biden: Biden’s climate and environmental justice proposal will make a federal investment of $1.7 trillion over the next ten years, leveraging additional private sector and state and local investments to total to more than $5 trillion

Their language about their spending aligns, too.

O’Rourke: … making historic investments in infrastructure, innovations and our communities

Biden: … makes a historic investment in clean energy and climate research and innovation

Biden is touting his plan to show that he is truly progressive on climate change. But when O’Rourke’s plan was released, it was criticized as not nearly progressive enough. Biden’s big push is a mere $200 billion more. And it’s almost the same as what O’Rourke pushed for.

Biden: On day one, Biden will sign a series of new executive orders with unprecedented reach that go well beyond the Obama-Biden Administration platform and put us on the right track

O’Rourke: We will cut pollution on day one, … As President, Beto will use his executive authority not only to reverse the problematic decisions made by the current administration, but also to go beyond the climate actions under previous presidents

On guaranteeing net zero emissions by 2050.

O’Rourke: We need a guarantee that we will, in fact, achieve net zero emissions by 2050 and get halfway there by 2030. For this reason, Beto will work with Congress to enact a legally enforceable standard — within his first 100 days

Biden: [Biden] will demand that Congress enacts legislation in the first year of his presidency that: 1) establishes an enforcement mechanism that includes milestone targets no later than the end of his first term in 2025

On taking money from oil, coal, and gas executives.

O’Rourke: We returned any money we received over $200 from any fossil fuel company executives. We will not take that money going forward

Biden: Vice President Biden has committed that Biden for President will not accept contributions from oil, gas and coal corporations or executives

And the bullet points of their plan, while not identical, have plenty of overlap.

O’Rourke: Start Cutting Pollution on Day One and Taking Executive Actions to Lead on Climate
Biden: Rally the rest of the world to meet the threat of climate change

O’Rourke: Guarantee our Net-Zero Emissions Ambition by 2050
Biden: Ensure the U.S. achieves a 100% clean energy economy and reaches net-zero emissions no later than 2050

O’Rourke: Defend our Communities That Are Preparing for and Fighting Against Extreme Weather
Biden: Build a stronger, more resilient nation

Even the roll-outs have a weird sort of confluence.

Both candidates joined the race devoid of policy proposals and banking on name recognition. In the wake of criticism that they were running for the sake of running, they both kicked off their issues focus with big climate change plans.

Biden’s plan differs from O’Rourke’s in one main facet throughout, however. He repeatedly goes after President Donald Trump in his proposal, noting how America “has abdicated its own commitment” to fighting climate change. While O’Rourke’s plan criticizes “the current administration,” it doesn’t mention the president at all.