But is it a ticket to the big leagues?

On Wednesday evening, a gaggle of Republican politicians converged on the Ronald Reagan Presidential Library in Simi Valley, California, for the second pair of GOP debates in the 2016 presidential election cycle. The candidates were split into two events, with the four lower polling pols grouped into the first debate, and the 11 higher-polling Oval Office aspirants in the second.

The goal of the candidates in the first debate was relatively simple: let Republican voters know who they are. In a media environment when real estate heir turned reality TV star Donald Trump can box everyone else out of the spotlight without a hair falling out of place, it can be difficult for other candidates to get attention.

In the Google Trends search volumes, depicted below, Graham is shown in blue, Jindal in yellow, Pataki in red, and Santorum in green. 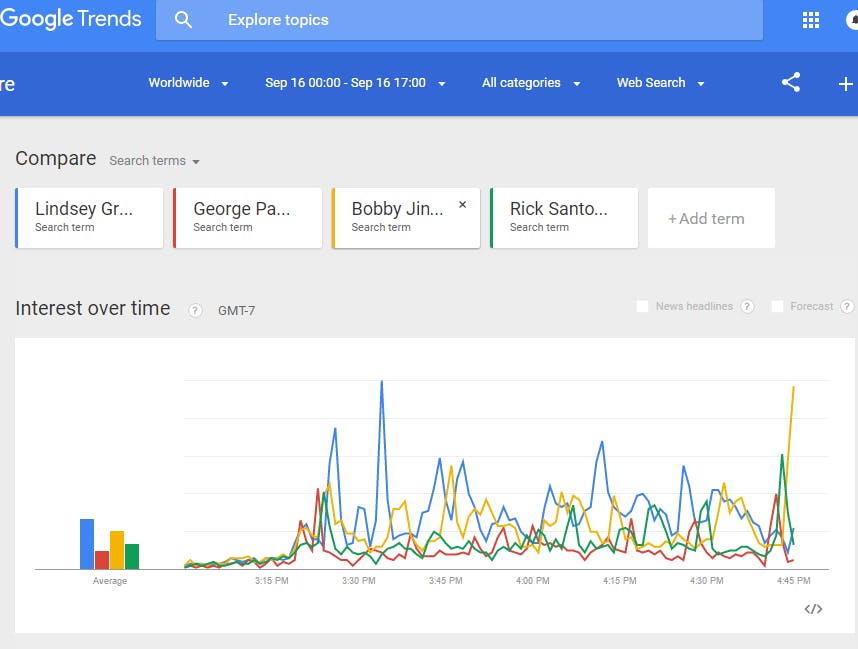 Graham quickly emerged as the candidate taking the strongest control of the room with a series of self-effacing quips. He couched his criticisms of President Barack Obama the context of someone who understands the political realities of Washington and possess an ability reach across the aisle when necessary. Even moderator Hugh Hewitt noted, mid-debate, that Graham was having a good night.

Graham repeatedly presented himself as the most hawkish Republican on foreign policy, especially when it comes to increasing the number of American troops on the ground in Iraq and Syria to combat ISIS.

In what emerged as the most memorable line of the evening, Graham insisted that socializing members of the opposing party is a key component of keeping the lines of communication open and getting things done. “First thing I’m going to do as president; we’re going to drink more,” he said.

Jindal, on the other hand, took a slightly different strategy: tacking hard to the right. He slammed Planned Parenthood and urged Republicans to do everything in their power to block government funding to the group, including shutting down the government. Aiming for the most conservative segment of the GOP base, generated interest in Jindal among Google searchers spiked, particularly at the very end of the debate.

A standout performance in the “kids’ table” debate can be a ticket to the big leagues. Former Hewlett Packard CEO Carly Fiorina dominated Google search traffic following the first undercarde debate earlier this year. That let to a significant boost in the polls for Fiorina and a subsequent spot on the big stage.