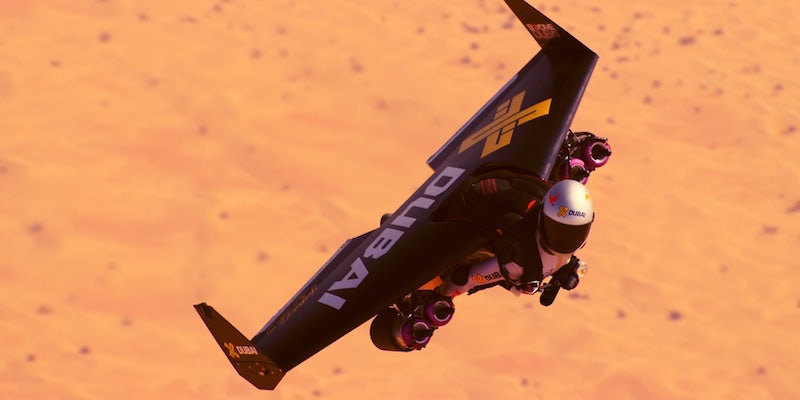 Daredevil with a jetpack races an airplane

Eat your heart out, Iron Man.

Yves “Jetman” Rossy, the Swiss daredevil and inventor of the jetpack, is back at it again and this time you can watch him do acrobatics with an airplane. As if soaring through the air with the future strapped to his back wasn’t cool enough, Rossy apparently decided that for this latest video, it was time to hop out of a helicopter and do some corkscrews alongside aerobatics champion Verez Zoltán over Dubai.

Rossy describes the 55 kg carbon fiber “wing” as “the culmination of decades of fulfilling a childhood dream through technological innovation, determination, teamwork and courage.” The powered wing allows Rossy to fly like a bird at speeds of up to 120 miles per hour with the assistance of four Jet-Cat P200 jet engines, modified from kerosene-fueled model aircraft engines.

And you’re going to want to sit through the entire video: There’s a sneak peak at Rossy’s next stunt.