A strange spiral galaxy almost 800 million light-years from Earth is doing something that scientists very rarely see in the wild: Shooting enormous jets of subatomic particles from its core into open space at nearly the speed of light.

No one is quite sure why.

Online amateur astronomers have helped a team of professional scientists find and examine the galaxy, known as J1649+2635, and it has defied the expectations of scientists who have only ever seen jets like this on other kinds of galaxies, according to a new report in Monthly Notices of the Royal Astronomical Society. 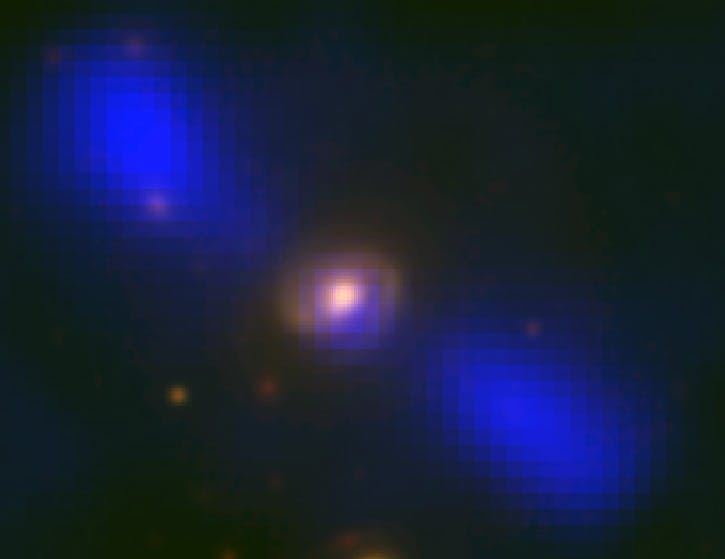 The 150,000 amateur astronomers at Galaxy Zoo have classified over 700,000 galaxies. These “citizen scientists” aid in monumental tasks like planet-hunting.

In the case of J1649+2635, finding these massive jets raises important questions about how galaxies formed in the early universe. J1649+2635 is only the fourth spiral jet galaxy ever found.

The researchers are calling the ultra-rare galaxies “Spiral DRAGNs,” meaning “Double-lobed Radio sources Associated with Galactic Nuclei.” You have to give them credit for a hell of an acronym.

The jets are powered by the gravity of supermassive black holes at the galaxy’s core.

“The great democracy of the Web,” as astrophysicist Martin Rees called it, has transformed the way we use science to understand the world. Open data allows anyone to take part by examining information and, in the case of Galaxy Zoo, classifying the galaxies we’ve spotted.

“Science is becoming a cooperative activity where amateurs around the world can join in,” Rees wrote.

Minnie Mao of the National Radio Astronomy Observatory (NRAO), who led the research, examined over 35,000 spiral galaxies classified by Galaxy Zoo participants and found J1649+2635, which was classified by 31 Galaxy Zoo volunteers, 30 of whom deemed it a spiral.

“This galaxy presents us with many mysteries. We want to know how it became such a strange beast,” Mao said. “Did it have a unique type of merger that preserved its spiral structure? Was it an elliptical that had another collision that made it re-grow spiral arms? Is its unique character the result of interaction with its environment?”

Mao credited Galaxy Zoo and projects like it with furthering this research and sounded optimistic that citizen science could contribute much more to astronomy in the years and decades to come.