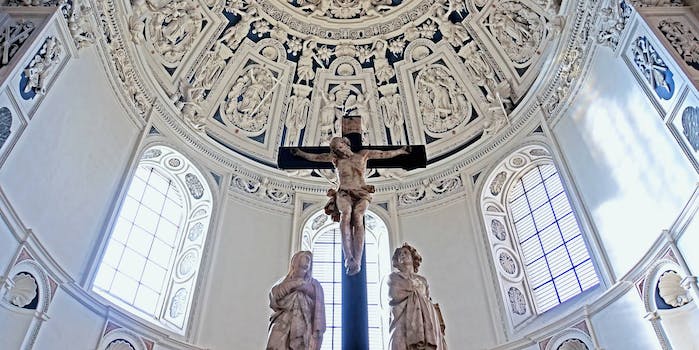 Jesus VR is a real thing, and it’s coming to a virtual reality headset near you

Virtual reality is supposed to open up new worlds and allow people to experience things they could only imagine. Or it can be used to tell the origin story of Jesus Christ.

Jesus VR – the Story of Christ will literally seat the viewer at the right hand of the Father as they watch the life of the man Christians identify to be the son of God. The story on display will cover events starting at his baptism and leading up to his crucifixion.

The project will be produced by Autumn Productions, a group that has been interested in revisiting history’s most important moments; prior to depicting Jesus’ origin story, the company produced Elvis & Nixon, a portrayal of an urgent meeting between rock and roll legend Elvis Presley and President Richard Nixon.

But if the King of Rock and Roll isn’t your thing and you’re more into the Kingdom of God, then Autumn Production’s first venture into virtual reality will likely be up your alley. The company filmed on location in Matera, Italy, an ancient village that was also served as the setting for Passion of the Christ.

The script for script for Jesus VR—the Story of Christ was handled by Andre van Heerden. It’s unclear if Matthew, Mark, Luke, and John will be given writing credits for their work in the Bible.

“The viewers truly feel they are there with Jesus and his disciples,” film director David Hansen said in a statement. “This is the most powerful story of all time and virtual reality is the perfect way to tell it.”

The production studio worked alongside virtual reality firm VRWERX to bring the film to life. The crew used 360-degree 4K cameras to capture the footage, with the intention to make the experience as immersive as possible.

Jesus VR – The Story of Christ is set to be released for Christmas 2016 and will be viewable on most major VR platforms, including the Oculus Rift, HTC Vive, Samsung Gear, and PlayStation VR.