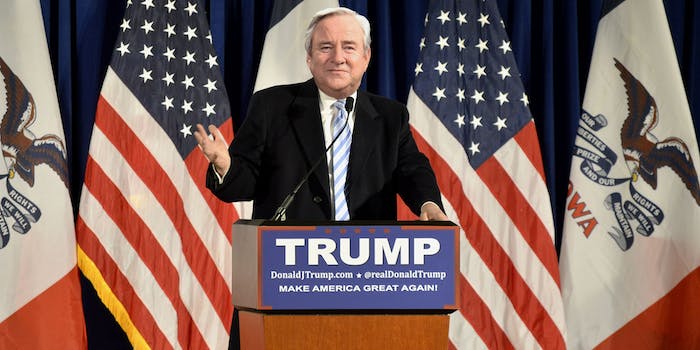 This is a big blow for Cruz, especially with the Iowa Caucus looming.

Jerry Falwell Jr., one of the most prominent evangelical Christian voices in America, has endorsed Donald Trump—and not fellow evangelist Ted Cruz—for president.

Falwell’s support is a blow for Cruz, a senator from Texas, who unlike Trump describes himself as an evangelical (Trump says he’s Presbyterian) and has relied on that community’s leaders for support.

The first primary election for the Republican nomination for president, in Iowa, is Feb. 1. The two Candidates are neck-and-neck in Iowa, with Trump currently leading by an average of 5.7 points, according to Real Clear Politics. Trump holds a commanding 16.9-point lead in the national GOP polls, and only Cruz is polling anywhere close to the businessman.

Trump spoke recently at Liberty University, where Falwell is president, a position he inherited after the death of his father, famous televangelist Jerry Falwell, in 2007—and notably where Cruz launched his presidential campaign. Trump, who has previously made stilted references to the Bible, notably referred to the biblical book 2 Corinthians as “Two Corinthians” in a speech—a jarring phrase, considering the book usually spoken aloud as “Second Corinthians.”

That gaffe didn’t seem to bother Falwell, who consistently praised Trump before formally endorsing him. He’s openly praised the billionaire former reality television star on Fox News, for instance, and Falwell’s Twitter account is a steady stream of Trump praise.

Neither Cruz nor Falwell immediately responded to requests for comment. Trump tweeted that it was a “great honor.”

Great honor- Rev. Jerry Falwell Jr. of Liberty University, one of the most respected religious leaders in our nation, has just endorsed me!