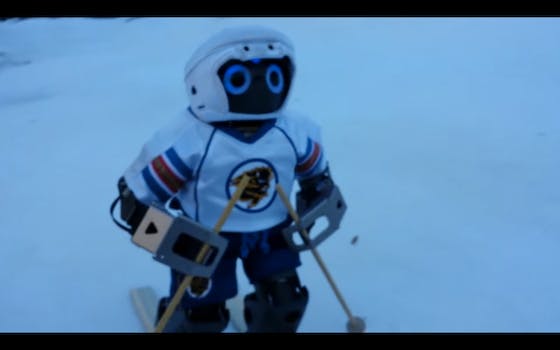 This adorable robot gave up hockey to learn how to ski

Formerly a hockey-playing superstar, Jennifer the robot is now hitting the slopes on skis.

She’s a product of work being done at the Autonomous Agents Laboratory at the University of Manitoba. The lab is focused on creating robotic entities that can move around and interact with the environment of their own accord, which is big work if we’re ever to live in the sci-fi future promised in movies. Along similar lines, the United States’ own Defense Advanced Research Projects Agency famously sponsors the DARPA Grand Challenge, which sees robots tackle all order of tasks without human control or interaction.

Not quite a black diamond run, but it’s a start.

She is articulated in a way similar to our own human bodies—she’s got “ankles” for angling the skis against the snow to steer and brake as needed, exactly the same way they teach tourists to ski on the bunny slopes.

Simply put: Baltes wants Jennifer the skiing robot to be a veritable Picabo Street, able to handle any kind of snowy situation with grace and aplomb. Check out the full video demo below.