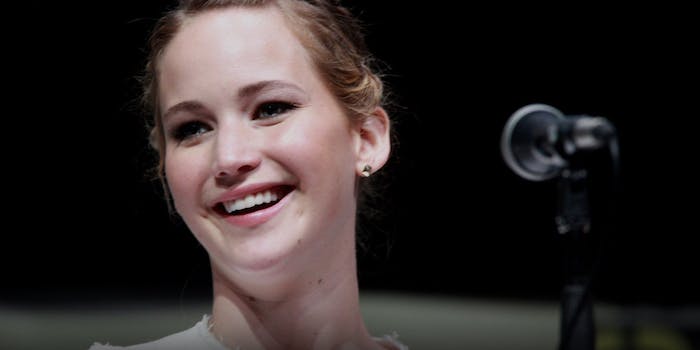 Jennifer Lawrence is right: "The law needs to be changed, and we need to change."

The juxtaposition of Jennifer Lawrence’s blunt response to the “celebgate” disclosure of her private images—”I didn’t tell you that you could look at my naked body”—with glossy, topless photo shoot images of the actress seems to have confused and even infuriated some people.

The fact that this combination of message and image inspires hostility and suspicion is a disturbing indictment of our cultural understanding of sexual consent.

It is profoundly unnerving how many people seem to find this complicated or objectionable, a reaction that seems to rest on an unquestioned assumption that women’s bodies, in particular, are public property. The argument seems to be that if a woman ever dares to expose herself to public view, she has consented to being viewed at any time and in any way. This view isn’t just illogical; it is, as Lawrence herself points out, pathological and predatory.

One of the most refreshing aspects of Lawrence’s response to nonconsensual consumption of her intimate images is her outright rejection of the idea that people who engaged in it were either confused or “not thinking.” No one who looked at Lawrence’s private images was confused about whether they had permission to do so. As Lawrence put it, “It’s my body, and it should be my choice, and the fact that it is not my choice is absolutely disgusting. I can’t believe that we even live in that kind of world.”

Every person who viewed or shared the images knew that they were engaging in nonconsensual sexual conduct, and to claim “thoughtlessness” in doing so is to admit that society is so accustomed to violating women’s bodies for personal gratification that it seems natural. “‘I just didn’t think about it’ is not an excuse,” said Lawrence. “That is the exact issue itself.”

Lawrence’s points are underscored by the fact that society generally understands the concept of consent quite well. Consent is the difference between a boxing match and an assault, between borrowing a car and stealing it, between donating a kidney and having your organs forcibly harvested. And yet none of the laws or norms surrounding consent in these and scores of other contexts inspires tormented think-pieces about whether we’re all on the verge of being rounded up and locked away on false charges of assault or theft or defensive screeching about how people who publicly give to charity have only themselves to blame if someone wants to walk off with their wallets.

Much of the defensiveness and hostility to Lawrence’s straightforward, indisputable assertion of her right to control access to her own body seems to be due to her characterization of the disclosure and consumption of the images as a “sex crime.” It’s worth wondering why so many people are scandalized by the suggestion that forcibly exposing people’s naked bodies to the view of strangers should be considered a sexual violation. After all, this is the essence of the crime of voyeurism, which is widely considered to be a sexual offense. Laws against voyeurism, as well as against unlawful surveillance and indecent exposure, demonstrate that physical contact is not a prerequisite for classifying conduct as a sexual offense. Lawrence is well aware, however, that current laws and norms do not yet clearly acknowledge that what was done to her was a sex crime, noting, “The law needs to be changed, and we need to change.”

She’s right. That’s why the Cyber Civil Rights Initiative, along with many other organizations and individuals fighting domestic violence and sexual assault, are calling for legislative, technological, and social reform to protect sexual privacy and respect sexual consent. Indifference to sexual consent lies at the heart of sexual crimes ranging from voyeurism to harassment to rape, and it is well past time that our society stopped pretending to be confused about this fact.

No decent human being should fear or disrespect the concept of sexual consent. Those who do, to use Lawrence’s eloquent words, “should cower with shame.”