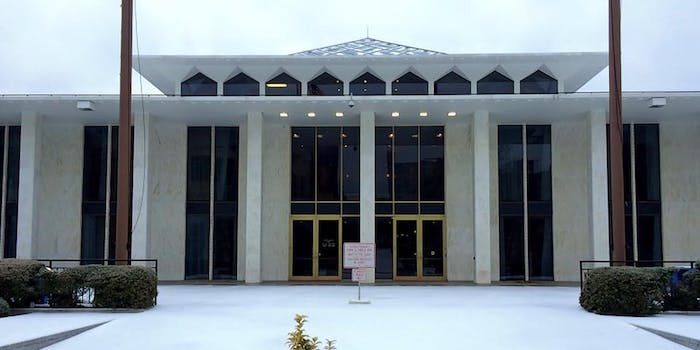 North Carolina senator ‘passed laws’ by himself during a snow storm

He's not going to let something like snow stop him from serving his district.

North Carolina Governor Pat McCrory may have declared a state of emergency due to a vicious winter storm, but that didn’t stop one of the state’s lawmakers from going to work and trying to accomplish some freakin’ democracy.

Newly appointed State Senator Jeff Jackson (D-Mecklenburg) showed up to the North Carolina General Assembly (NCGA) Tuesday, a day just like any other day, except everyone else stayed at home. Not only was he the only politician who came to work, he was the only government employee period.

The #NCGA the night before an ice storm. Very quiet in this building… pic.twitter.com/VUOwpSLwFX

No problem getting a great parking space this morning… #ncga

Instead of turning back, Jackson decided he should at least do something while he was there. He was a state legislative party of one, and like SpongeBob SquarePants, he was ready—ready to pass some laws.

The fact that he couldn’t legally pass any of those laws didn’t matter. He passed them on social media anyway.

I think I'm the only legislator in the building. Let me take care of a few things. Medicaid = expanded. Teachers = paid. Film = jobs. #NCGA

This is going to be like Night at the Museum only at the end we'll have a stronger middle class. #NCGA

After a certain point in the day, his fake law-passing spree gained the attention of his constituents, the Internet, and some worried lobbyists who started to call in.

Am now receiving lots of calls from actual lobbyists. Even the false appearance of power gets their attention. #JustOneLegislator #ncga

No single person should have all that power in government (we actually have some nice documents in place that says you can’t), but after six years of bickering do-nothings in Congress, Jackson’s unilateral lawmaking feels like a breath of fresh air.

Not only that—some of his constituents now have a better idea of where their representative stands on the issues.

Just had a big debate over cutting the university system even more. Decided not to, because obviously that's a bad idea.#JustOneLegislator

Our jails are filled with the mentally ill and chemically addicted. Just expanded mental health care for them.#JustOneLegislator #snowday

I just defeated a filibuster because I needed a drink of water. That removes any opposition to new child care subsidies.#JustOneLegislator

With most of the NCGA’s legislative calendar canceled until the snow goes away, the state government will have to be put on hold. But now that Jackson’s accomplished everything he set out to achieve in a single day, he’s got a lot of time to kill for the rest of his two-year term.