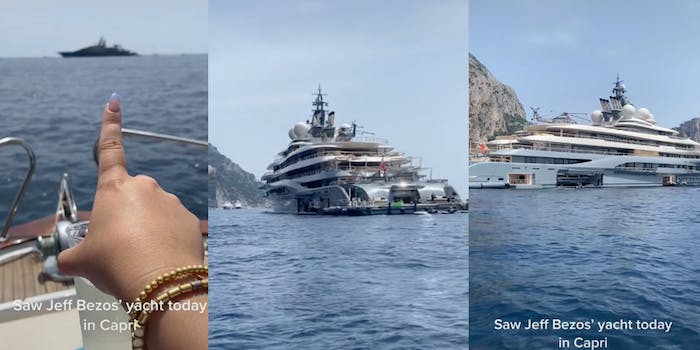 Nonetheless, commenters on the video were appalled by the sight of it.

Less than a week after he stepped down as Amazon CEO, a TikToker thought they’d spotted Jeff Bezos’ yacht parked outside the Italian island of Capri.

The yacht in the TikTok, named the Flying Fox, is shown with a helicopter on it, which may have explained why people thought it was Bezos’. Recent reporting on a new boat he was commissioning revealed that the new vessel included a helipad.

Others on Twitter also spotted the boat and claimed it was Bezos’ as well.

Although many online have claimed it as Bezos’ yacht, it’s not 100 percent certain the Flying Fox belongs to him, according to SuperYachtFan.com.

During another viral sighting of the Flying Fox two years ago, Amazon denied Bezos owned the boat. Bezos did buy a new yacht just this May, but it’s expected to look much different than the yacht spotted in Capri. According to Boat International, the vessel is still being built.

Nonetheless, commenters on the video were appalled by the sight of the sprawling superyacht.

“He literally has so much money that he didn’t feel ANY impact when buying it,” noted Liz G. “Eat. The Rich.” said another

But some pointed out that if you ever purchased anything from Amazon, in a way you were complicit in funding it.

Unless, of course, Bezos doesn’t own the yacht, that is.