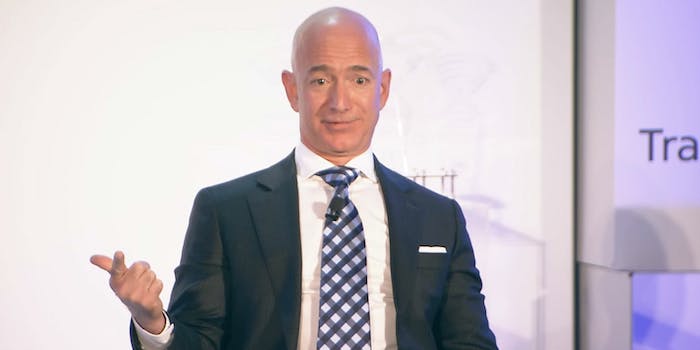 Jeff Bezos and Amazon are not the resistance

The enemy of your enemy is only your friend if you have something to gain.

In the first year and a half of the Trump presidency, the #resistance has adopted a reflexive position: anyone feuding with President Donald Trump is on their side. For the most part, this automatic allegiance has worked out. DREAMers, the LGBTQ community, Black Lives Matter, organized labor, and environmentalists are all worthy allies for Democrats. Sure, there have been a few conservative political opportunists in there, and the FBI is a strange bedfellow for anyone who loves civil rights, but for the most part, it has worked. That is, until now.

The president has been feuding with Amazon, and Amazon’s owner Jeff Bezos. Trump fired off several tweets recently criticizing the behemoth retailer for not paying their fair share of taxes and overburdening the U.S. post office.

Amazon is doing great damage to tax paying retailers. Towns, cities and states throughout the U.S. are being hurt – many jobs being lost!

While we are on the subject, it is reported that the U.S. Post Office will lose $1.50 on average for each package it delivers for Amazon. That amounts to Billions of Dollars. The Failing N.Y. Times reports that “the size of the company’s lobbying staff has ballooned,” and that…

A number of popular figures on Twitter who self-identify as part of the #resistance were quick to chime in on Amazon’s behalf.

That awkward moment when Trump tries to destroy Amazon for not paying sales taxes when Amazon does and it's Trump's own store that doesn't https://t.co/ygptcRix8Q

Everyone, go read the @WashingtonPost and then make sure you go buy something from @Amazon! Tell Trump to take a hike!

It is a tempting to view Trump as the sole cause of America’s woes. That all people need to do is join together in a band of unlikely allies. If liberals, leftists, and #NeverTrump conservatives could come together, the fantasy goes, their collective bogeyman could be conquered and justice would be brought back to the world. The reality is that Trump is a product of a broken system. Amazon is product of the same system. And while the president’s attacks on the company and on Bezos are certainly in bad faith, there is plenty to critique about the company that’s become the world’s largest retailer.

The New York Times and various other outlets fact-checked Trump’s claims about Amazon’s taxes. Many of the articles defended Amazon, pointing out that the company does pay local taxes in states where they operate. A number of these outlets pointed out that Amazon pays hundreds of millions of dollars in local taxes, but often failed to mention what their effective tax rate is versus what they paid. If you owe 28 percent and you manipulate business deductions to get those taxes down to 15 percent, no one is going to throw you a ticker tape parade, and it is difficult to see why we should applaud corporate behemoths, who very rarely pay their fair share.

Additionally, the Times mentions, towards the end of their discussion of Amazon’s tax rates, “an analysis published in February by the Institute on Taxation and Economic Policy concluded that Amazon did not pay federal taxes in 2017. It cited the company’s S.E.C. filing in concluding that Amazon took advantage of a variety of tax breaks and credits to avoid paying federal taxes.”

So, Trump is correct. Amazon does not pay their fair share, particularly at the federal level. Our president is the living embodiment of federal jurisdiction and it would be reasonable for any president to make that criticism. However, the reason Amazon doesn’t pay federal tax is due to the kind of tax breaks Trump continues to champion. In fact, Amazon benefited from the Republicans recent tax overhaul.

In defending Amazon, ironically, mainstream Democrats and their sympathetic news organs have missed a big opportunity to attack Trump and Amazon on the issue of corporate tax.

It is fair to say that Trump’s claims about the post office are a bit more dubious. It’s hard to draw a direct correlation between the decline of the Postal Service and the rise of Amazon. The post office has not reported net income since 2006, when Amazon was a shadow of what it is today.

Though Amazon didn’t cause this decline, it could be doing more to stop it. The volume of first-class mail has decreased by 43 percent since 2001. The massive increase in online retail could offset these losses. Amazon has admitted that the company has “an arrangement” with the Postal Service, though the exact details are unknown.

The U.S. Postal Service has claimed that the arrangement is “profitable,” but one can’t help but wonder if the balance of power between the public and private sector were shifted with additional regulation, perhaps the post office, and by extension, the American people, could be making more money off of Amazon. No matter what that arrangement is, it is safe to assume that Amazon, again, the world’s largest retailer, is also not paying their fair share into the American postal system, which they depend on to keep their company afloat.

How you view Amazon’s effective tax rate and the company’s relationship with the post office largely depends on your political orientation. Even if you are more of a small government person, there are a number of things Amazon does that you would be hard-pressed to view as anything but objectively bad.

There has been plenty of coverage of the brutal working conditions inside of Amazon fulfillment centers. Working in the company’s more white-collar positions sounds equally terrible. The company has shown no interest in improving the conditions of their over 500,000 employees, as the company has been ardently anti-union from the beginning.

Amazon has also been accused of doing serious damage to the communities it enters. Like many other large companies, Amazon likes to turn the building of new locations into a contest. If the company pits various cities against each other, it can win concessions like tax subsidies and other incentives such as targeted infrastructure improvements.

Many people have fairly pointed out that this beef is less about tax policy and more about the Washington Post’s sharp criticism of Trump.

But Trump is also implicitly criticizing Post owner Jeff Bezos not just for his business practices, but also for an apparent conflict of interests. The man whose company pays no federal taxes also runs a major newspaper that reports on stuff like federal taxes. There are widespread reports that Bezos “does not get involved” with the Post’s coverage, though media watchdogs like Adam H. Johnson of FAIR (Fairness and Accuracy in Reporting) beg to differ.

Washington Post has been stanning hard for Amazon HQ2, often copy and pasting figures directly from Amazon press releases without attribution. Trumps a paranoid despot but let’s not act like billionaires don’t exert political influence over the publications they own.

Amazon's PR is made a bit easier when Bezos-owned Washington Post publishes economic impact figures without question or disclosing they're copy and pasted from an Amazon press release https://t.co/e77mRzGymB pic.twitter.com/5v06KtVZtU

Even if Bezos really doesn’t get involved with The Post’s work, we have plenty of proof that billionaires controlling the news can be bad for their outlets and society. Rupert Murdoch’s handling of Fox News is a pretty compelling example and if you look at history you will find that William Randolph Hearst once started a war to sell newspapers.

It might be comfortable to pick a side in these various clashes of the titans, but always remember: You don’t have to.