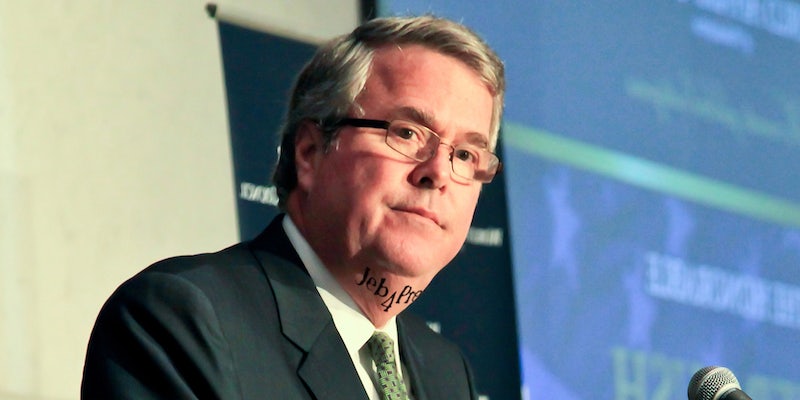 The World Affairs Council/Flickr (CC BY 2.0) | Remix by Jason Reed

This is one way to show your support for a presidential candidate.

Two weeks ago, Victor Berger IV made Republican presidential candidate Jeb Bush a simple, reasonable, six-second promise: “If the Vine gets 1 million loops by midnight,” Berger wrote, “I will get a #Jeb4Prez tattoo on my neck!”

Berger got a lot of encouragement from Vine users, as well as from the Bush campaign.

I'd like to make Vic get a #Jeb4Prez tattoo. He's halfway to 1mil, give this Vine a few views… https://t.co/iIGFSDB4Pm

As you might guess, Victor Berger IV now apparently has an awesome neck tattoo.

“Yesterday was a crazy day,” Berger told the Daily Dot via email. “Lots of family stuff going on. Was also fired from my job at the Turkey Hill because of the tattoo. Just awful. But I will be applying to a number of places this week that allow tattoos.” 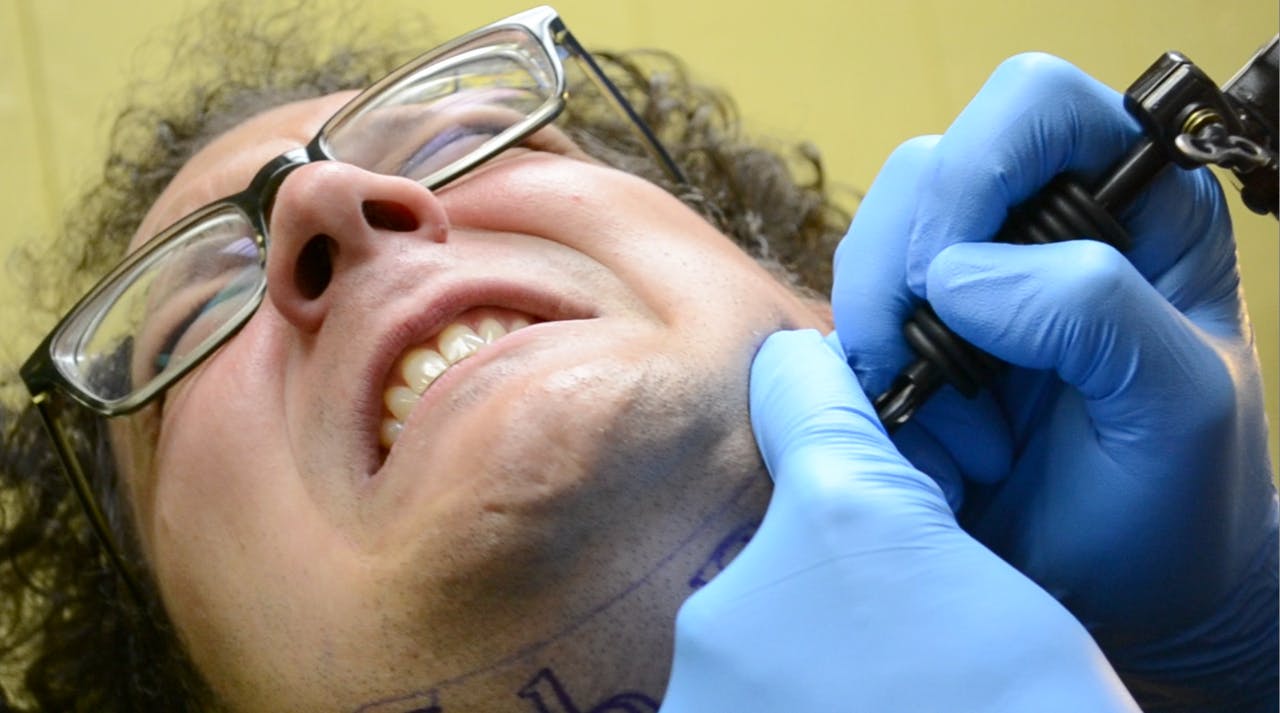 Berger claims that he was fired from his job at Turkey Hill, but Time reports that both locations in his area denied that anyone by his name had ever worked for them. When the Daily Dot asked a manager at the Turkey Hill on Hellertown Road in Bethlehem, Pennsylvania, if Berger had recently worked there, the manager said, “I refuse to confirm or deny anything.”

Beger expected this, telling the Daily Dot, “Of course they’d say that. Whatever.”

Berger is actually a video editor and director who has worked with comedians Neil Hamburger and Tim & Eric. So, the Turkey Hill thing—and most everything Berger says—is almost certainly just a joke. But the tattoo is all too real, at least according to the tattoo artist.

Elvis, the tattoo artist at Steel City Tattoos in Bethlehem, where Berger says he got his Bush ink, described the man as “a little fuckin’ odd.”

“He looked, like, nervous as shit about the whole thing and he wouldn’t shut the fuck up about the whole process with his vines or whatever,” Elvis said. “He just had to get it done.” 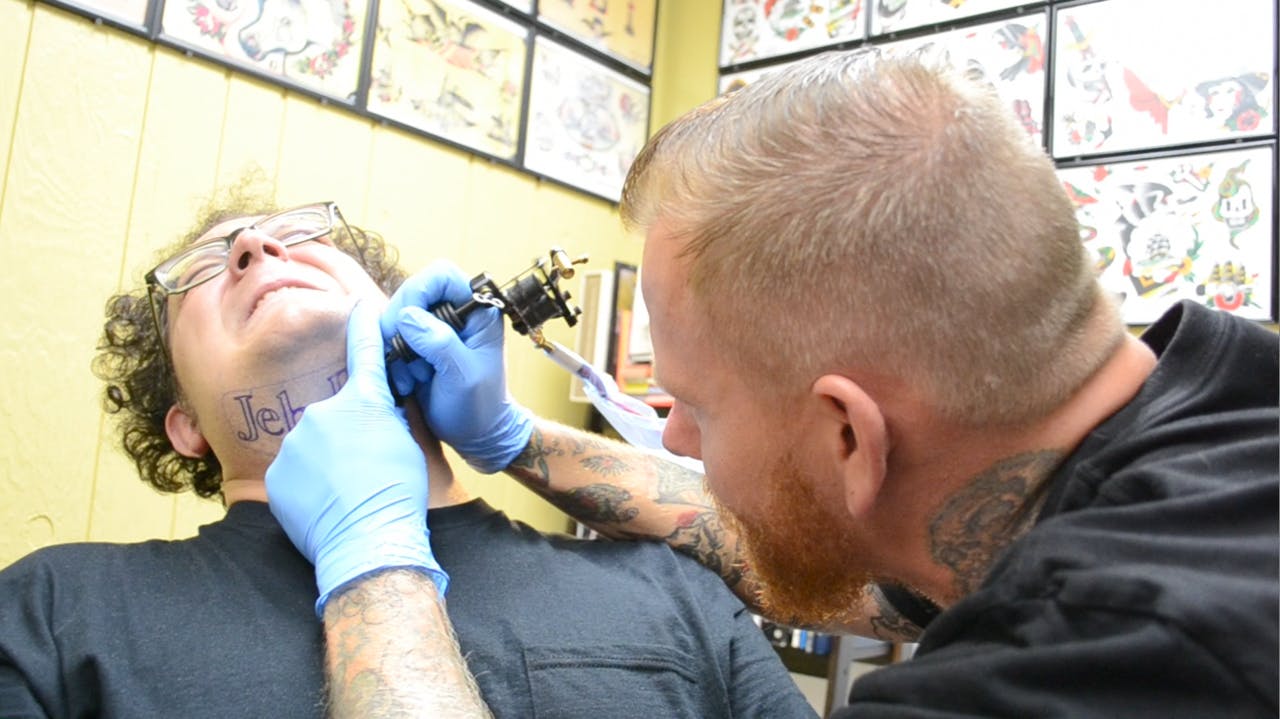 Describing his decision to get the tattoo, Berger told a bizarre, probably exaggerated, probably completely untrue, but definitely hilarious story.

“Thank you for asking about the backstory and the reason why I did this. No one else has,” he began.

“My nephew William and I were gigantic Chubby Checker fans. It was a bond we both shared. We were close. At 16, he got a little Chubby Checker tat on his shoulder. I took him to get it and he wanted it because he always looked up to me and CC always reminded him of me. Long story short, he got the tat and two weeks later he died from a severe infection due to a dirty needle at the tattoo parlor. It was awful, as you could imagine. Still haven’t settled in the courts.”

“A few weeks ago,” Berger continued, “I went to a Chubby Checker concert in my town. I arranged to meet with him through his manager to tell him my nephew’s story. I walked up to Chubby, and before I could even say hello, he said, “WHY ARE YOU WEARING THAT SHIRT?” Didn’t expect that. I was wearing a Jeb T-shirt. I left without telling him the story and didn’t know how to handle it. It was so shocking to me. He wasn’t nice.”

The Daily Dot was unable to confirm the interaction with Chubby Checker, but there was a Chubby Checker concert in Bethlehem, Pennsylvania, on July 24, according to the artist’s website.

“I went home and decided to see if I could make this Jeb vine hit a million loops,” Berger said. “If it hit a million, I would get a Jeb Bush neck tattoo and never let anyone make me feel bad for what I believe in. I feel I owe it to my nephew to do this. I’m doing this for William.”

“Honestly didn’t know how many loops the vine would get, but it makes me feel so good to know that I am doing this for Billy,” he continued. “Thank you to Governor Bush for showing his support and encouraging me to hit one million loops.”

“Though,” he added, “I don’t understand why he has not shown his support now that I have the tattoo. Wish he could help get my job back at the Turkey Hill.”

In his interview with the Daily Dot, Berger offered an interesting analysis of the former Florida governor’s candidacy.

“You asked me if I’d be voting for Jeb. Personally, I just think he looks like a President. I know you shouldn’t base your vote on appearance, but he looks like he could be a President. He is handsome, has good taste in wardrobe, etc. And from my vine, it’s cool to see he uses Apple products. I have an iphone. But ultimately, I’m still undecided. And after seeing him stop showing support for my tattoo now that I have it, I really am questioning whether or not he would make a good President.”

“People have been really mean since I got my tattoo,” Berger said. “Lots of jerks online have been calling me names, and some even say I didn’t get the tattoo. I will attach a couple pics for you if you want to use them to prove them wrong. The artist told me neck tattoos are the most painful. It really hurt.”

Despite the pain, though, Berger, was unbowed.

“Even though it was severe pain, I’m considering getting a second tattoo,” he said. “Possibly a tattoo to remember William with. Maybe a Chubby Checker tat. We’ll see.”

Photo via The World Affairs Council/Flickr (CC BY 2.0) | Remix by Jason Reed