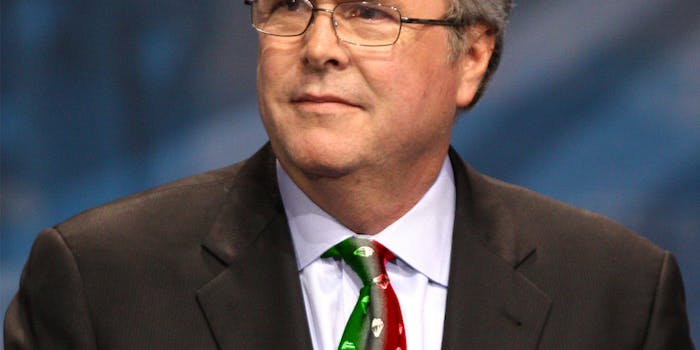 Jeb Bush may have committed perjury, laughs about it on twitter.

Former Florida governor and likely 2016 hopeful Jeb Bush is going after the Hispanic Vote—but not how you think.

In 2009, the Texas-born caucasian marked the “Hispanic” ethnicity box on his voter-registration application form with the Miami-Dade County Elections Department, reports the New York Times. Bush, however, says the whole thing was just a “mistake.”

Despite being whiter than white bread—and a member of America’s largest business/political dynasties with a family genealogy rooting back to European royalty—it’s possible that Bush’s sincere love of and immersion in Hispanic culture caused his confusion: He speaks fluent Spanish, lived in Venezuela for two years, and married the Mexican-born Columba Bush. He was even labeled a “Hispanic Candidate” by Spanish-language network Univision earlier this year.

But is it also possible the “mistake” was a calculated ploy to bring his appeal to Hispanic voters back into the public eye before an election cycle that has already found Hillary Clinton clamoring to secure the same constituency?

Bush laughed off the misrepresentation as a mistake, blamed his father (typical), while his son took the opportunity to align himself with his Hispanic constituency with the hashtag #HonoraryLatino.

He wasn’t alone in finding the humor. The obvious joke about pronouncing Jeb as “Heb” quickly made the rounds and comedian Patton Oswalt’s apparently-also-funny brother, Matt, tweeted:

an obviously caucasian Jeb Bush claims to be hispanic, becoming the first person to ever steal from Carlos Mencia's act

LOLGOP joked about Jeb being caught in his own voter purge:

By marking Hispanic on a voter registration, Jeb Bush increased his chance of being caught in a Jeb Bush voter purge. http://t.co/T8QWwmn8KE

And Salon compiled a list of the best responses:

But not everyone was laughing. Carolina Lopez, a Miami-Dade election official, told the Times that Florida Division of Elections requires hard copies of applications with signatures as voters are affirming an oath. And FlaDems pointed out the mistake isn’t just a factual error; it’s potentially a third-degree felony.

Hey @JebBush, did you know it's a 3rd degree felony to submit false information on your voter registration form? pic.twitter.com/6xCafz1ydB

One doubts the former governor will face charges for felonious perjury.

Initially unable to be reached for comment by the Times, Bush spokeswoman Kristy Campbell told Business Insider, “It’s unclear where the paperwork error was made. The governor’s family certainly got a good laugh out of it. He is not Hispanic.”

While Jeb Bush may hope to share his son’s ethnic heritage appeal to Hispanic voters by calling attention to his background, a recent report from Politifacts reminds us the former Florida governor’s policies have not always favored the marginalized minorities he would like to count as a constituency in 2016.

“I eliminated affirmative action [in Florida colleges and universities] by executive order—trust me, there were a lot of people upset about this. But through hard work we ended up having a system where there were more African-American and Hispanic kids attending our university system than prior to the system that was discriminatory.”

After running the numbers, checking the figures, and doing the math, Politifact found this statement “Mostly False.”

Correction: Former Florida Gov. Jeb Bush’s son, Jeb Bush Jr., who is Latino, is the one who used the #HonoraryLatino hashtag in a tweet.

Photo via Gage Skidmore/Wikimedia (CC BY 3.0) | Remix by Max Fleishman