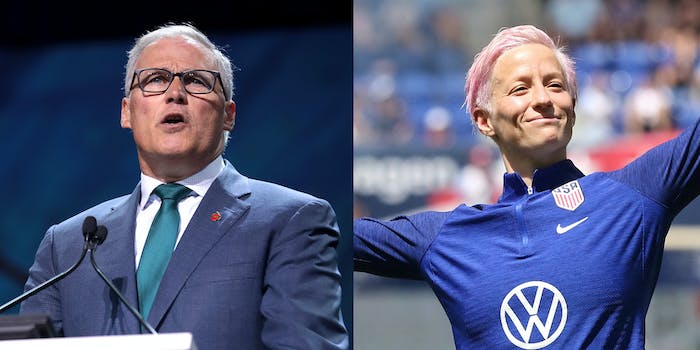 It doesn't sound like Rapinoe thinks politics are in her future.

U.S. Women’s Soccer star Megan Rapinoe has been intertwined in politics for the past several weeks—but 2020 Democratic hopeful Gov. Jay Inslee wants to make that link permanent: with a post in his hypothetical administration.

Inslee floated the pick for his secretary of state during Netroots Nation, a progressive conference in Philadelphia on Saturday.

“My first act will be to ask Megan Rapinoe to be my secretary of state. I haven’t asked her yet so this could be a surprise to her,” Inslee said, drawing cheers from the audience. “I actually believe this because I think what she has said that has inspired us so much is such an antithesis of the president’s foreign policies.”

Rapinoe was one of the stars of the U.S. Women’s National Team that won the World Cup earlier this month.

The Daily Kos, one of the sponsors of Netroots Nation, described Inslee’s answer as a joke. However, if Inslee was serious, it doesn’t appear that Rapinoe thinks public office is in her future.

The soccer star was asked by Chuck Todd of Meet the Press on Sunday whether she had considered running for public office.

“I’m not sure I’m qualified for office,” Rapinoe said, laughing.

“There’s no qualifications for running for office these days,” Todd interjected.

EXCLUSIVE: World Cup champion Megan Rapinoe says she will continue her fight for equal pay #MTP #IfItsSunday @mPinoe: "I am going to fight for equal pay, every day. For myself, for my team and for every single person … man, woman, immigrant, U.S. citizen, person of color" pic.twitter.com/YSTvYEMdrB

“Yeah, well, yeah, that’s true. Up to 44 I guess there was,” Rapinoe said, referencing Trump as the 45th president. “I’m going to fight for equal pay every day for myself, for my team, and for every single person out there—man, woman, immigrant, U.S. citizen, person of color, whatever it may be. Equal pay, as the great Serena Williams said, until I’m in my grave.”